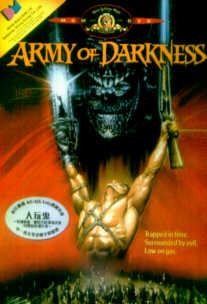 The third and final installment in the Evil Dead trilogy. Typically, people either like this one the most or hate it the most. When compared to the other installments in the series, it is the most drastically different. While Evil Dead and Evil Dead 2 were predominately horror films about a group of people in a cabin getting picked-off one at a time, Army of Darkness leans more in the direction of a sword and sorcery fantasy epic.

Following the events of Evil Dead 2, our hero Ash has landed in medieval times. Assumed to be “The Chosen One”, our reluctant hero is burdened with the task of ridding England of the Deadites; an army of the walking dead. Ash inadvertently makes things worse by taking the Necronomicon (the Book of the Dead) from its resting place without reciting the proper incantation. The Army of the Dead awakens, now being lead by the evil force from the first two Evil Dead movies taking on the form of “Bad Ash”. Ash has to defeat his evil doppelganger, vanquish the army of the dead and find a way to get back to his time. Easier said than done.

While Army of Darkness may skimp on the horror in favor of action and (goofy) comedy, it has a place in the hearts of fans everywhere for being the definitive version of Ash. All his best and most memorable lines spring from this movie, and even today, the general public recognizes him best for his role in Army of Darkness than the Evil Dead.

Army of Darkness has the largest budget of all the films in the trilogy, and really does close the saga up in a grand fashion. The battle at the film’s finale is especially epic and has some of the coolest-looking sword-wielding skeletons outside of a Ray Harryhausen flick. Some of the swordfights are choreographed a bit clumsily, and might be a tad too “slow” for a modern audience used to shaky-cam fight sequences. The special effects are the best in the saga. The Deadites are brought to life (figuratively speaking) with dynamic flare and their interaction with each other and the knights is just hilarious.

Raimi does tend to overdose on the Three Stooges-style slapstick he’s so fond of. The sequence where Ash his menaced by a horde of mini-Ashes can be a bit grating on the nerves and falls more into the realm of “stupid” than “funny”. While Evil Dead 2 managed a perfect balance of horror and dark comedy, Army of Darkness crams the comedy in every place it’ll fit rather unashamedly, and it can get some-what distracting.

There are two versions of this film, the theatrical cut and the director’s cut (also known as the “bootleg edition”). The director’s cut contains a longer battle with the Army of the Dead at the very end, but is missing a number of the classic one-liners (including “Good, bad, I’m the guy with the gun”). The most important thing about the director’s cut is the “Armageddon” ending, which is rather depressing and doesn’t mesh with the comedic atmosphere of the film at all. I personally prefer the theatrical cut’s “S-Mart” ending, as it gives a more pleasant ending to the Evil Dead saga.

Sadly, one thing neither cut has included in the film-itself (though they’re available as extras on the DVD) are the important deleted scenes. It’s hard to understand why many of these scenes were cut, as they actually would have made elements of the film a great deal more coherent. One scene, in particular, makes it much clearer that Bad Ash is in fact the invisible evil from the first two films. Another scene shows Ash convincing Eric the Red’s armies to aid him and King Arthur in battle against the Deadites.

Overall, Army of Darkness is the most drastically different installment in the Evil Dead trilogy, but the epic nature and sense of finality does bring the series to a satisfying close. The over-use of slapstick comedy can be a bit too distracting, though.

Army of Darkness is worthy of a B. A great finale to the series, but might alienate fans of the previous installments.