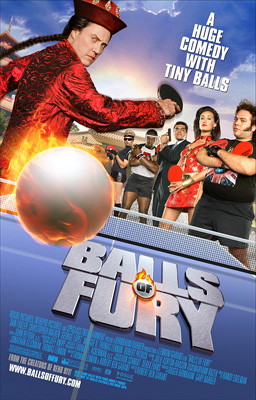 I love these goofy sports comedy flicks: “Dodgeball”, “Beerfest” and now “Balls of Fury”. At first glance, I gave “Balls of Fury” a resounding beh, but then Christopher Walken appeared on the screen and I exclaimed a resounding eh?, followed by a far more resounding zeh! Okay, so “zeh” isn’t really something people scream with joy, but I don’t think I use the letter “z” on my keyboard enough and I want to get my money’s worth. As silly as it is, “Balls of Fury” is one of the better comedies I’ve seen this year and made all the better with an additional helping of sweet ping pong action to keep things fast and fun.

Randy Daytona (Dan Fogler) is a washed-up pro ping pong champ hired by FBI agent Ernie Rodriguez (George Lopez) to enter an exclusive table tennis tournament run by Triad crime lord Feng (Christopher Walken). Daytona is way off his game, however, and seeks tutelage from one of the greatest ping pong players in the world, Master Wong (James Hong). With help from Hong’s adopted daughter, Maggie (Maggie Q), Daytona gets in shape just in time to enter the tournament…where he discovers that losing a game means losing his life.

There’s a lot of good comedy talent assembled for this flick, though they may fly over some people’s radar. James Hong stole a lot of the show in this movie as the blind ping pong master. If you haven’t seen any of the man’s movies then there’s a better chance you’ve heard some of his voice-over work (he was the Mandarin in “Super Robot Monkey Team Hyper Force Go” and Delong Wong in “Jackie Chan Adventures”) and he’s just an all-around funny guy. Diedrich Bader manages a small supporting role as “Gary”, but I won’t spoil it for you. He’s another talented comic both on screen and doing voice over roles (he’s Oswald from “the Drew Carrey Show” and Hoss Delgado on “Billy & Mandy”). Robert Patrick also manages a brief cameo at the beginning and he’s always funny because, hey, he’s Robert Patrick.

I don’t think I’ve ever seen anything Dan Fogler has ever been in, but the man plays a pretty good heroic slob character. Christopher Walken is of course funny in everything he does because he’s freakin’ Christopher Walken. I’ve never been a huge fan of George Lopez but he plays a pretty funny supporting character. The bit in the hotel room between him and Fogler was comic gold. Thomas Lennon (“Reno 911”) shows up as Fogler’s arch nemesis, Karl Wolfschtagg, and while I’m not a big “Reno 911” fan I can’t deny the guy was a riot.

“Balls of Fury” has a very wacky sense of humor and not so much in a “Naked Gun” sort of way but more in a “what the hell are they doing that for” sort of way. It hits its mark mostly with false alarm humor, where it leads you into a joke you think you see coming and then blindsides you with an even better one right when you least suspect it. And it does this frequently. I felt this was both its strongest point and its weakest. Toward the end of the movie you start to grasp the “false alarm” strategy which makes them a little predictable at times. I also felt they bypassed a good opportunity with the showdown between Daytona and Wolfschtagg, but I won’t go any further in-depth on that.

The film has a great cast, some very well-timed and well-conceived jokes and a plot that works in its all-out craziness. And even when the movie isn’t funny, the ping pong tricks (fake though they are) can be really cool to look at. Definitely a good way to end the Summer movie season.