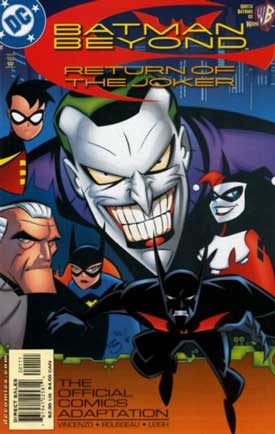 There seems to be something about Batman Beyond that tends to rub people the wrong way. From what I’ve seen, fans either love it or hate. The haters typically dislike the show for having a new Batman as well as giving Bruce Wayne an “ending”. Personally, I enjoyed Batman Beyond for what it was. It took a while to grow on me but eventually the show came into its own and I began to appreciate Terry McGinnis as the new Batman. The series lasted for three seasons, with this film acting as the “big finish”. Not unusual, as Batman the Animated Series ended with the film Batman & Mr. Freeze: SubZero, while the New Batman Adventures ended with the film Mystery of the Batwoman.

It’s the future; Bruce Wayne is an elderly old man and his teenage protégé, Terry McGinnis, has taken up the mantle of Batman. A group of street punks calling themselves the Jokers have begun swiping high tech equipment, a marked step-up from their usual petty theft and mindless destruction. As it would turn out, they’re all under the guidance of the real Joker, back from the dead after decades. To make matters worse, the Joker knows too much, including Batman’s secret identity. A mystery unfolds leading to the identity of the resurrected Joker as well as what exactly went down on the night he died.

This film doesn’t follow-up many plotlines from the television series, making the story very accessible to newcomers. There are a few elements fans will have better appreciation of, such as the gang of Jokers or the concept of “splicing”. There’s one very painful moment in the film where Terry delivers a dreadful exposition explaining his origin to Bruce Wayne (for the benefit of the audience who came late to the party) and it couldn’t sound more forced or ridiculous. Aside from that little bit, this is the best material Batman Beyond has to offer.

Now, there are two versions of this film: the edited version and the uncut version. There are numerous small changes between the two; the edited version cuts out lots of violence including punches, knife stabs and blood-red paint. It also cuts out suggestive material, like a scene where Batgirl interrogates two hookers as to the wherabouts of Robin. However, there is one *major* difference between the two versions: the death of the Joker. The edited version plays it off in a cartoonish manner and makes it rather comical. The uncut version is very dark and considerably more violent. For my money’s worth, I’d go for the uncut version, as its all-around superior.

The story goes back and forth between the “present day” Batman stuff and the future scenes. My favorite part of the movie happens to be the flashback sequence containing the death of the Joker. It brings back the whole “detective” element of Batman and really gives Terry a chance to earn his stripes as the Caped Crusader. The future Joker’s identity remains uncertain through most of the film, with a few red herrings included to throw the audience (and the cast) off track. It’s done extremely well, and the revelation of the Joker’s identity is one of the strongest points in the film.

The movie is probably the most violent the DCAU (DC Animated Universe) has ever gotten. I already mentioned the death of the Joker, but this film also includes scenes of child torture, one of the Jokers biting it, Bruce Wayne getting roughed up real bad and a satellite laser annihilating dozens of innocent people. They don’t pull their punches with this film (at least, not in the uncut version).

The animation is provided by TMS (Tokyo Movie Shinsha) and it’s some of their best. The fight scenes are very fluid and well-choreographed, particularly the opening sequence where Batman fights the Jokers at the tech facility. And, of course, the explosions look terrific.

Batman Beyond: Return of the Joker may not be for everyone since it isn’t the “classic” interpretation of the Dark Knight everyone recognizes. Still, it has one of the strongest stories from anything produced for the DCAU as well as some of the most impressive animation. Being a fan of Batman Beyond, I give this film a B.