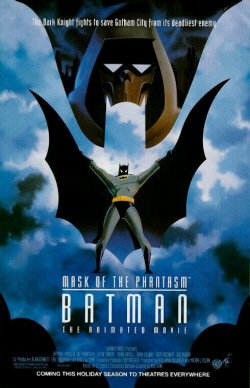 What’s the greatest Batman movie ever made? Well, it isn’t Adam West’s Batman, it isn’t Tim Burton’s Batman and it isn’t Batman Begins. At least, not to me. In my personal opinion, the greatest Batman movie ever made is Batman: Mask of the Phantasm. This film was brought to us by Bruce Timm and Paul Dini, the creators of Batman the Animated Series, which is arguably the best interpretation of the Dark Knight out there. Mask of the Phantasm gets to the core of the character, delving into what makes Batman tick, aiming for character depth over action sequences.

A mysterious, ghostly figure calling itself “the Phantasm” is stalking Gotham’s underground, brutally murdering crime lords and mob bosses. Batman (Kevin Conroy) gets right on the case, but matters are complicated once the Gotham PD mistakes the Phantasm for the Caped Crusader and put an APB out on the hero. Bruce Wayne’s life isn’t getting any easier, either, as a long lost love, Andrea Beaumont (Dana Delany) comes back into his life. Bruce recalls asking her to marry him shortly before beginning his solitary career as a crime-fighter and considers giving up the superhero gig to be with her. Meanwhile, mob kingpin Salvatore Valestra (Abe Vigoda) seeks out protection from Batman’s number one foe, the Joker (Mark Hamill), which invites a whole new level of insanity and danger into the plot.

Batman: Mask of the Phantasm is told through multiple flashbacks which delve into the origin of Batman much deeper than most film adaptations (save for possibly Batman Begins). These flashbacks are dark and moody, even more so than most Batman fiction, and show Bruce’s struggle with the death of his parents and even his first night on the job, sans-Batman get-up. The flashbacks illustrate everything which eventually lead him to become a secluded loner. It can be quite depressing, as this film goes out of its way to inform the audience that the good guys don’t always get a happy ending.

With this being a feature film, Bruce Timm and Paul Dini were given license to be far more violent and gruesome than even in their award-winning television series. The Phantasm and the Joker murder quite a number of people, and in some very nasty ways. Due to the limitations of animated television story-telling in the early 90’s, the Joker wasn’t always permitted to be portrayed as the psycho killer he really is. This film goes all the way, showing just how terrifying the Clown Prince of Crime can be. Additionally, punches and bullets are allowed to actually hurt people in this movie. Both Batman and the Joker take some serious blows, with the Joker loosing quite a number of teeth.

One thing that really stood out to me with this film was the operatic version of Danny Elfman’s classic Batman theme. It’s truly gorgeous-sounding. As far as the animation goes, it’s very fluid and detailed (considering Bruce Timm’s art style) and certainly looks like it was produced on a feature film budget. It’s not the *best* Batman animation ever produced, as Batman & Mr. Freeze: SubZero and Batman Beyond: Return of the Joker actually have superior animation, but it is very pleasing to the eye.

In my book, this is the quintessential Batman film. It has everything one would need; the origin of Batman presented in a deep, sophisticated manner, a story that never insults the intelligence of the audience, and when necessary, a terrific spectacle of action.