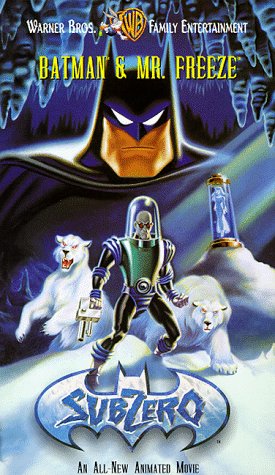 Following the events of Batman the Animated Series, the supervillain Mr. Freeze (Michael Ansara) has recovered the frozen body of his wife. She is dying and the only means to save her is through an emergency organ transplant. Mr. Freeze bribes a down-on-his luck surgeon, Dr. Belson (George Dzundza), to perform the operation off the record. Freeze finds a perfect match in Barbara Gordan (Mary Kay Bergman) who also happens to be Batgirl in her spare time, and kidnaps her. Batman (Kevin Conroy) and Robin (Loren Lester) quickly race to rescue their partner, as the organ transplant would prove fatal.

Mr. Freeze is one of the best, if not *the* best villain to get a makeover in Batman the Animated Series. Where he was once a lame-o named Mr. Zero, Paul Dini transformed him into a multi-dimensional, tragic character. Though his methods are unscrupulous, his goal to save the life of his wife is very sympathetic. The character of Dr. Belson is utterly forgettable, but he is needed for the purpose of performing the operation.

If you’re expecting a lot of Batgirl action with this film, then I’m sorry to disappoint you, but she spends most of the movie out of costume. She still has her standard spunk, but she’s not really Batgirl without the uniform. You get to see plenty of her in the New Batman Adventures, though (which was the follow-up to Batman the Animated Series). Most of the heroics are performed by the Dynamic Duo.

SubZero was produced for a theatrical release, originally, but wound-up being pulled by Warner Bros as they feared it wouldn’t earn much of a profit. It ended up being shelved for a few years until they finally decided to release it on video. So, although this was released straight to video, the budget of the film is definitely of theatrical quality. The animation produced by TMS (Tokyo Movie Shinsha) is very fluid and impressive. For some reason, they’re just the best when it comes to drawing explosions.

SubZero is a great Batman film and a marvelous “last hoorah” for Batman the Animated Series, but not nearly as memorable as some of the Dark Knight’s other theatrical outings. I’d recommend it to Batman fans, but give it a B, personally.