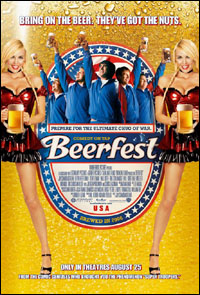 This is easily the best comedy of 2006 (so far), at least, it was better than all the other comedies I’ve bothered to go see this year. Beerfest should appeal to just about every party-going male over the age of 21 (and, honestly, quite a number *under* the age of 21).

The Wolfhouse Bros travel to Germany to spread the ashes of their late Grandfather when they accidentally discover an underground international beer-drinking competition called “Beerfest”. The Wolfhouse Bros are then publicly humiliated by the German team, who also claim that their late Grandfather stole a valuable beer recipe from them. The Wolfhouse Bros return to America in shame and decide to compete in next year’s Beerfest to avenge their Grandfather’s honor. They gather together a crack team of beer fanatics: Landfill, the beer-chugging powerhouse, Fink, the brainiac Jew who is an expert on the physics of alcohol, and Barry, a down-on-his-luck world-class drinking game competitor. The five then spend the following year training and drinking their asses off in order to take the Germans down at their own game.

If you haven’t figured it out by now, Beerfest is all about beer. Lots and lots and lots of beer. So much beer, in fact, that they had to put a warning at the beginning of the film cautioning audiences that if they drink that much beer, they *will* die. Beerfest manages to work in practically every beer-related event one can imagine. Beer Pong, Quarters, Upside-down Chugging, Shotgunning, Long-Pouring…you name it, it’s in this movie. Hell, they make up plenty of ingenious drinking games, too. Basically, if you’ve ever been to a party, you’re going to see a lot of familiar material.

The characters that make up the USA team are all hilarious in their own ways. While the Wolfhouse Bros are the relative “straight men” of the film (every comedy needs one), the other members are a riot to watch. Tank, the beer-chugging oaf, gets some of the best lines and there’s a hilarious gag involving him toward the end of the movie. Fink’s labwork is disgustingly funny, while his participation in the “Final Battle” is his most humorous moment. Then there’s Barry, who probably has one of the coolest scenes in the film when he shows off his talent at Quarters. Beerfest has a very well-defined cast of characters that carry the entire movie and are all memorable in their own way.

The Beerfest competition at the film’s finale is basically one ethnic stereotype after another and they’re all magnificent. Most of the jokes are crafted at the expense of Germans and their stereotypical brew-guzzling society. Only a few World War II gags, though (none involving Hitler, surprisingly).

Beerfest is a low-brow comedy, but really, what can you expect from a movie about glorifying alcoholism? Low-brow or not, it’s still ridiculously funny, rarely giving the audience a minute to catch their breath. If you’ve ever had a beer in your life there’ll be something you’ll like about this movie.