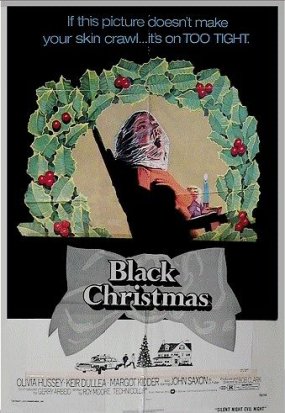 When most people think of “the first slasher film”, typically they’ll think of John Carpenter’s Halloween. And yes, it’s true, Halloween is what really kicked the sub-genre off and got it recognized by mainstream movie-goers. However, 4 years before Halloween, there was this little gem starring Margot Kidder (the Amityville Horror) and John Saxon (a Nightmare on Elm Street). Because Black Christmas predates the slasher genre it really has more in common with suspense-thrillers like Alfred Hitchcock’s Psycho and has an overall higher quality to it than slasher flicks like Slumber Party Massacre and Sleepaway Camp.

The night before Christmas Eve, a strange heavy-breathing lunatic shrouded in darkness sneaks into a local sorority house and begins leaving insane, lewd phone-calls consisting of himself screaming and ranting in numerous voices. On Christmas Eve, members of the sorority (including Margot Kidder) start disappearing. They try to get help from the police and the Lieutenant (John Saxon) puts a tap on their phone. The phone calls keep coming and the sorority sisters keep disappearing until eventually only one is left all alone in the house.

Directed by Bob Clark (who, ironically, also directed A Christmas Story), Black Christmas sets a very eerie tone right from the beginning. You never get a good look at the killer through-out the film. All scenes involving him either have him shrouded in darkness or are seen from his point of view. The POV sequences are especially unnerving, as you watch him scream and rant and tear up an attic or rock a dead girl in a rocking chair back and forth like a baby. It’s very dark and very creepy. The bits with him shrouded in the shadows are also remarkably well-done. Virtually the only part of the killer’s body you ever see clearly is a single eyeball, peering through cracks in doors and what-not.

There are a number of plotlines going on at once, such as the family of one of the victims trying to locate their daughter or a search party finding the remains of one of the madman’s earlier kills out in the woods. The only time the movie ever slows down is for the purpose of building tension; it’s never “boring”. The gore in the film isn’t very intense, usually with the more brutal deaths occurring just off screen, allowing your imagination to fill in the gaps. It’s an old fashioned way of delivering a scare but I find it just as effective, if not more-so, than buckets of gratuitous gore.

I’d honestly have to say this movie is just as good as Halloween, almost better. It’s a real shame Black Christmas never caught on with the mainstream and when most people think of a “Christmas-time horror movie” all they can come up with is Silent Night, Deadly Night. This is a very well-made, if often overlooked horror film, perfect for the holiday season.