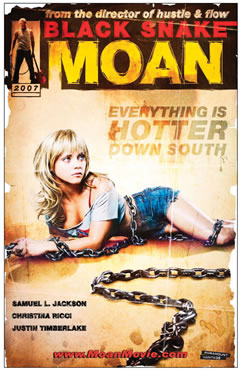 Lazarus (Jackson) has just seen his wife of twelve years walk out on him with his younger brother. Feeling helpless, the farmer and former blues musician spirals into alcoholism. Elsewhere, Rae (Ricci) watches helplessly as her boyfriend, Ronnie (Justin Timberlake), leaves her to join the National Guard. Rae has some serious mental health issues, and no sooner than Ronnie leaves, Rae begins slathering herself all over anything that says “yes”. This inevitably gets her into trouble and a brutal ass-kicking which leaves her out-cold in the middle of a rural road. Lazarus finds her and nurses her back to health, only to learn in town of the girl’s self-destructive behavior. Believing he’s found a new purpose in life, Lazarus dedicates himself to helping Rae find a better path. Unfortunately for Rae, Lazarus’ lessons involve a chain and a radiator.

There was something rather unsettling about watching Wednesday Adams spend the first half of this film running around topless and screwing everything that moves. An interesting career choice on her part. While at a glance “Black Snake Moan” may look like nothing but material to jerk-off to, it honestly has a very solid script, strong characters and excellent performances (even Justin Timberlake’s).

The movie is almost entirely character-driven, with everything riding on the actors and their performances. Samuel L. Jackson has to be one of my favorites. Only he could do something as goofy as “Snakes on a Plane” one minute and then something as deep as “Black Snake Moan” the next. I found Lazarus to be the better character of the film; watching him find the strength to weather his crisis by helping Rae conquer hers was very moving. And anyway, there’s something very satisfying about seeing him scream some sense into a crackwhore.

Christina Ricci’s character starts out nearly impossible to like; an absolute tramp with a bad attitude and a personality so ugly you’re aching for someone to pop her in the mouth. Her nymphomania at the start of the film seemed rather gratuitous, like it was only there as an excuse to watch her get naked and turn all the guys and lesbians in the audience on. Be sure to watch where you sit when you go to the theater to see this, folks. However, it was necessary, since, well, she is a nymphomaniac and that’s what they do, after all. As the movie progresses you of course learn that there’s more to her than meets the eye and the usual tragic sort of history that would turn a person into that. It was a bit textbook, character-wise, but her gradual transformation into someone of decent mental health as well as the hardships she faced trying to atone for her past behavior eventually made her a more endearing character.

Justin Timberlake’s role as Ronnie in this film is a bit smaller than Jackson’s or Ricci’s, but still rather important. Ronnie is a pathetic kind of guy who needs Rae to take care of him. While this may make him seem unlikable, he isn’t evil or anything, and he was also the only source of stability in Rae’s life. He also develops throughout the film, coming to terms with his own weaknesses. I’m no Justin Timberlake fan by any stretch of the imagination, but there was nothing particularly bad about his performance. He plays the sickly, pathetic type very well.

This movie takes place down south, and I’m talking way down south. Writer/Director Craig Brewer manages to capture the backward, filthy American deep south exceedingly well, not just in location, but in the people who play townsfolk and supporting characters. These people don’t look like they were churned out of a Hollywood cast factory, but act with exceptional skill and prowess. I think some words of praise should be especially sent to John Cothran Jr. (who plays Reverend R. L.) and S. Epatha Merkerson (who plays Angela) for their wonderful performances that were on par with any of the “big name” actors.

“Black Snake Moan” surprised me, and this is the kind of surprise I like. It’s more a romance/drama than a comedy, so don’t go in expecting a laugh-a-minute (though there are some hilarious parts). Nevertheless, it’s an excellent film with strong characters and an equally strong cast.