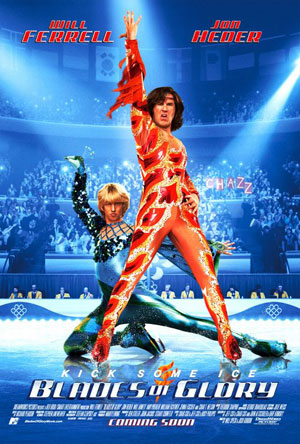 As much as I like Will Ferrell, I have to confess, the guy has starred in some truly terrible movies. While I wouldn’t rank “Blades of Glory” amongst the “terrible” I would definitely file it alongside the “not so good”.

The effeminate Jimmy MacElroy (Jon Heder) is one of competitive figure-skating’s most talented and respected athletes, a bastion of tradition, grace and dignity. Chaz Michael Michaels (Will Ferrell) is known as the “Lone Wolf”, a badboy rockstar of the skating world who plays by his own rules and performs with a combination of unmatched enthusiasm and vulgar sex appeal. The two polar opposites are naturally bitter rivals and after an incident at the World Winter Games, are banned from men’s singles figure-skating for life. Three and a half years later, Jimmy’s old coach (Craig T. Nelson) brings the two arch foes together to reenter the Winter Games as the first ever men’s pair. Jimmy and Chaz both want the gold yet despise one-another, but if they want to win they’ll have to get along. Meanwhile, the brother-sister team of Stranz Van Waldenberg (Will Arnett) and Fairchild Van Waldenberg (Amy Poehler) will win the event at any cost, and that includes cutting Jimmy and Chaz out of the picture.

So yeah, this movie’s ridiculous, but that’s hardly its problem. Ridiculous comedies are easy to make funny…except something went wrong with this attempt. “Blades of Glory” sets up some pretty good jokes but misses the landing more often than not. The first half the film is definitely the worst, with the majority of the gags revolving around Jimmy and Chaz’s childish brotherly loathing of one another. You know, immature barbs like “You smell”, “Nuh-UH!” Watching them quarrel like a pair of six year-old siblings might have been funny if it had merely been a backdrop while other jokes took the foreground, but alas, it’s the central “funny” of the film’s first half.

The second half of “Blades of Glory” is decidedly stronger. Once Chaz and Jimmy learn to get along and play off one another rather than against each other, and the film’s other plotlines begin taking shape, the humor starts to hit a lot harder. A few of these additional plotlines include the villains manipulating their younger sister, Katie (Jenna Fischer), into reluctantly playing with Jimmy’s heart to break up the team and one about the duo’s coach teaching them a forbidden, possibly fatal technique known as the Iron Lotus. These extra threads help to improve the film immensely and add some decent change-ups in the comedy bits. Still, even then, the film will make you chuckle more than it will make you laugh-out-loud.

I will give “Blades of Glory” some credit, the entire “chase scene” between Ferrell and Arnett towards the end of the film was absolutely hilarious and the strongest moment of the whole movie. Very memorable and well done, though it doesn’t save the entire flick.

“Blade’s of Glory” is a rather subpar comedy. Not terrible but not really worth the $10 movie ticket, either. I’d recommend renting it on video if you’re in the mood for a new comedy and you like Will Ferrell, otherwise save your money.