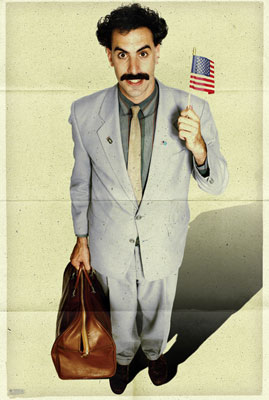 This film is gloriously racist.

I’ve always wanted to use the term “gloriously racist” in a review and in the first sentence, no less! Well, the term fits this movie like a glove and you don’t have to be racist to enjoy this movie (though it helps). “Borat” doesn’t pull its punches and instead slugs you square in the funny bone with a pair of brass knuckles. I’ve never seen anything so overtly politically incorrect in my entire life, and rarely have I ever laughed so hard in a public place. You may end up feeling like you’ll be going straight to Hell for laughing at the jokes in this film, but its okay, because everyone else in the theater will be joining you.

Borat Sagdiyev (Sacha Baron Cohen) is a television reporter in his home country of Kazakhstan. Have you ever heard of Kazakhstan? If the answer is “no” then I can hardly blame you. The cultural differences between America and Kazakhstan are staggering, and Borat wishes to bring the two cultures more closely together. Along with his producer, Azamat (Ken Davitian), Borat travels to America to film a documentary to help the people of his country more properly understand and appreciate American culture. However, the people of America have a tremendously difficult time appreciating Kazakhstan culture, leading to one awkward moment directly after another. Shortly after arriving in New York City, Borat is sidetracked by an episode of Baywatch and becomes smitten with the beauty of Pamela Anderson. With a new goal in mind, Borat and Azamat travel across country to California in order to meet Anderson, learning more about America along the way.

The character of Borat originates from the television series called “Da Ali G Show”, which I’m afraid to say I have never seen in my entire life. I don’t even know what channel it’s on (BET?). I mention this because, honestly, you don’t need to know who the **** “Borat” is to find this movie funny. All you need to know about Borat you learn in the first ten minutes. He’s from Kazakhstan and he likes America. That’s it.

The sense of humor in “Borat” is scattered all over the grid. It can range from intense gross-out humor, to subtle “did he just say that?” humor, to slapstick gags, to types of humor I don’t think I’ve ever seen before. The main joke is that Kazakhstan is so incredibly backward from American sensibilities, it’s a miracle the two nations manage to coexist.

I mentioned that this film is “gloriously racist” and I meant it. The bulk of the gags are at the expense of the people of Kazakhstan, black people, white people, Jewish people…practically every skin color and ethnicity takes a pounding. If you can’t handle jabs at your culture, or any one else’s culture, then this film isn’t for you (you probably shouldn’t own a TV, a radio, or even go outdoors if you’re really that terribly sheltered from political incorrectness). The jokes are in poor taste and that’s just what makes them so damn funny.

Borat’s road trip includes his attempts to learn American humor, have a dialogue with feminist groups, learn to drive, purchase a car, sing the national anthem at a rodeo and unknowingly join in a gay pride parade. My hat goes off to Sacha Baron Cohen for delivering lines with such ferocious hilarity that you miss several in a row simply by laughing so hard. He pulls off the character magnificently and you’d almost swear on a stack of bibles that he hails from Kazakhstan.

I suppose this film isn’t for everyone. The racially sensitive will likely have to be carried away on a stretcher from multiple heart attacks, while PC crybabies will be tempted to picket local theaters. Also, if for any reason you object to seeing a 500lbs bare naked man running around a hotel room, then you might want to rethink viewing this film. But for everyone else who actually has a sense of humor when it comes to politcally incorrect gags, this movie couldn’t be any funnier. I rarely give comedies an A, but “Borat” accomplishes everything expected of it and then some. Funniest movie of the year.