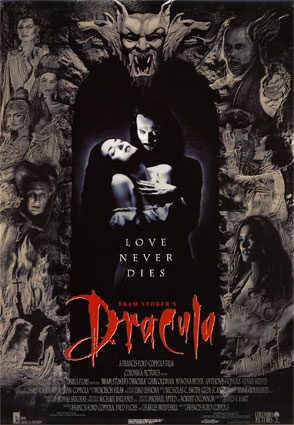 I’m not usually one to enjoy vampire films. The obnoxious subspecies of goth teenage crybabies who haunt the isles of Hot Topic like a horde of grumbling zombies have pretty much cemented my hatred of vampires. Yet, despite their tainting of a once respectable genre of horror, I find myself to have truly enjoyed Francis Ford Coppola’s adaptation of Bram Stoker’s classic vampire novel. It veers away from the stale goth stereotypes (dark and brooding gorgeous sex gods of death) and instead takes its inspiration from the classic sources, including my favorite vampire film of all-time, Nosferatu.

London real estate agent, Jonathan Harker (Keanu Reeves), travels to the gloomy Transylvanian castle of the eccentric Count Dracula (Gary Oldman) to close a deal. Dracula is a disturbing and creepy old man with a brutal and haunting history. Dracula becomes instantly smitten by a photograph of Harker’s wife, Mina (Winona Ryder), who has a more-than-passing resemblance to his lost love, Elisabeta. Dracula travels to London using his supernatural powers to seduce Mina, while Jonathan is left to rot back in the castle. Dracula’s presence is quickly felt by the London society, as Mina’s lifelong friend, Lucy, falls victim to Dracula’s seductive powers. Dr. Van Helsing (Anthony Hopkins) is called onto the scene to investigate and quickly recognizes the signs of a vampire in their midst. Mina’s fate seems sealed unless someone can manage to put Dracula to rest, permanently.

This is possibly my favorite telling of Dracula as it combines the many interpretations of the Count’s character into a single exquisite personification. Gary Oldman’s Dracula is a fusion of both the disgusting and vermin-like Count Orlock of Nosferatu as well as the dark and charming Bela Lugosi version from the original Dracula by Universal Studios. This combination results in a Dracula which can appeal to everyone; those who believe he should be frightening (me) and those who believe he should be seductive (goths). The effects used on Dracula are superb (I particularly liked his sentient shadow), as he transforms into various monsters of all varieties.

The cast of humans are excellent; hell, even Keanu Reeves is tolerable (though just barely). Anthony Hopkins practically steals the show as Van Helsing. His interpretation of the good doctor is a bit over-the-top, working in several moments of hilarious dark humor to break up the monotony of sex and violence. He’s very endearing and almost as memorable a character as Dracula-himself. Winona Ryder and her naively innocent appearance lend to a perfect Mina. Mina’s dilemma over her devotion to Jonathan and her lust for the Count make for some excellent moments spotlighting the character. Then there’s Keanu Reeves as Jonathan Harker. His English accent is atrocious, but after a while it eventually grows on you. While he still sounds like he’s about to end every sentence in “duuuuude”, he manages to pull off the role.

Francis Ford Coppola spares no expense in sets, costumes and mind-bending special effects. The gothic structures and landscapes are eerily breath-taking (Dracula’s castle is magnificent), while the effects have withstood the test of time most admirably. Surreal moments such as rats scurrying upside-down across a ceiling, or water dripping upward from a bottle are unnerving in their simplicity, while other more “in your face” scares, like Dracula transforming into wolf and bat creatures, deliver the intended shock with total success.

There are only a handful of vampire films which I enjoy, and I’m proud to say that this is one of them. It’s an all-around excellent film and certainly the best interpretation of Dracula I have ever seen. I have to give it an A since, outside of some stiff acting by Keanu Reeves, there really is nothing wrong with it on any level.