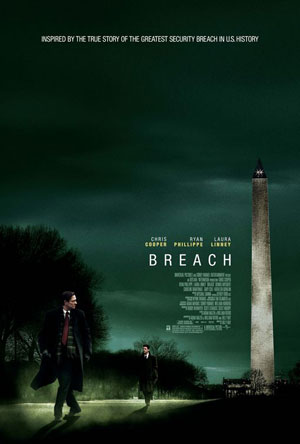 Check it out, another political conspiracy suspense thriller movie that’s, surprise surprise, based on a true story. Okay, okay, so it may not be anything particularly inventive, but to my astonishment, “Breach” was actually pretty interesting. I mean, it’s not something I’d grant a repeat viewing or go out of my way to purchase, but I don’t find myself regretting the $8.25 I spent on the ticket.

Eric O’Neil (Chris Cooper) is a young hot shot, looking to make FBI agent. He is assigned to watch a fellow government employee, Robert Hanssen (Ryan Phillippe); an assignment he at first considers beneath him. It would seem that Hanssen is a sexual deviant and the FBI is looking to catch him red handed. However, as O’Neil works closer with Hanssen, he discovers the man he’s gradually coming to respect is something much worse: a spy. Hanssen may very well be the worst spy in United States history and O’Neil has only a few months to catch him in the act before he retires and gets away scott-free.

“Breach” is a bit textbook, I have to admit. The very first scene of the movie makes it perfectly clear that Hanssen is caught and exposed. But then, this was based on a true story which happened only six years ago, so I suppose secrecy about the film’s ending would be a bit futile. Nevertheless, when you know how a story ends, you can’t help but feel the “suspense” aspect of this “suspense film” take a slight plunge.

Anyhow, if you can get that out of your head, “Breach” is rather thrilling. There are no explosions or car chases or high octane max the envelope thrill ride banzai extreeeeme action sequences; “Breach” is grounded very firmly in reality. This works well, as you feel a stronger connection to the characters knowing they’re all real and that their actions have actual consequences. You have to be in to this kind of movie, though, otherwise you might get a little board. Still, I never considered myself a big fan of the political conspiracy thriller genre, yet I had a perfectly entertaining time.

I suppose what really ails the movie hasn’t anything to do with the story or acting (both the leads, Cooper and Phillippe, deliver excellent performances), it’s just that the movie is very…unremarkable. A bit like that film “Arlington Road” which came out some years back; it seems destined to be forgotten. Still, a nice low-key thriller such as this makes for a refreshing diversion from most of the other so-called “suspense thrillers” being released these days; films that have more in common with “Fast and the Furious” and “Under Siege” than other films from their genre.

Also, while it was probably the fault of the projectionist at my theater, I could see the freaking boom mike through-out the entire film. It drove me insane and almost killed the movie. If this happens, go get the manager and tell him/her to tilt the projector up a little more. Believe me, that is no way to watch a movie.