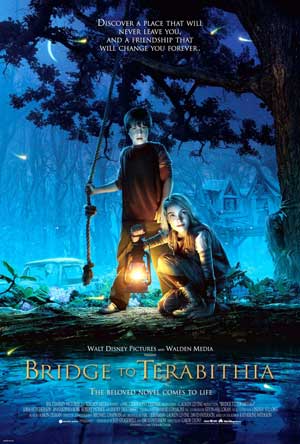 The trailers and television spots for this film gave me the impression that it was going to be another “Harry Potter” or, more appropriately, another “Chronicles of Narnia”. You know, a movie where a group of adorable kids travel to a beautiful fantasy world and engage in a slew of amazing adventures, jam-packed with gorgeous special effects and CGI from start to finish.

Well, that’s not what this movie is like at all, but I’m sure that everyone who read the book (ie: not me) already knew this. So, even though this movie is only somewhat similar to what the marketing campaign promised, is it any good? Yeah, actually, it’s pretty good.

Jess (Josh Hutcherson) is a young boy with a gift for creative art but is constantly forced to repress his imagination by his father (Robert Patrick), who wants him to “keep his head out of the clouds”. Things change when a new girl, Leslie (AnnaSophia Robb), arrives at school. Leslie is the daughter of two fiction authors and has a wild imagination. Gradually, she helps Jess set his imagination free and the pair become fast friends. Together, Jess and Leslie create their own fantasy world known as Terabithia, where they use their imaginations to escape from reality as well as devise means to conquer their own personal problems.

At first I was disappointed with the film because I felt like I’d been snookered by a very misleading marketing campaign. Then, as I began to understand the real point of the movie, I came to appreciate it. For the most part, anyway.

“Bridge to Terabithia” is for kids, more-so than “Narnia” and “Harry Potter”. It is not crawling with special effects like the trailers imply (in fact, just about all the special effects in the film are shown in the trailers), but instead is a much more personal tale about two close friends growing up and making the most of the time they have together. For at least the first half of the film, yes, the entirety of the plot is basically two kids frolicking in the woods and having imaginary adventures. Kind of like live action role-players, only okay, because they’re children and not mentally-stunted 30 year-olds.

I was a bit “Meh” through the first half. I could tell it was a good movie for kids, and I’m sure if I’d been a ten year old I would’ve been having a great time, but I didn’t feel like I was in the right target audience. Then the big twist happened halfway through and I was in shock. I won’t say any more about it for those of you who don’t want spoilers, but I will say that it was an emotionally thrashing moment which hits you like a bus (if you haven’t read the book or had it spoiled for you, anyway). It was here where I understood the movie’s true lesson, or at least, the dominating one: treasure every moment of your childhood and never let the good memories escape.

It’s kind of hard to talk about the movie (the parts I really liked, anyway), because I don’t want to spoil it. So I’ll talk about something else.

The special effects provided by Walden Media (the “Lord of the Rings” people), as sparingly as they’re used, are up to their usual standards of quality. The fantastic creatures and landscapes which make-up Terabithia are quite cartoonish, but they’re supposed to represent the imagination of a child, so it’s perfectly appropriate.

There’s also the acting from the two lead kids, which impressed me quite a bit. AnnaSophia Robb shines brightest as the wild and rambunctious one, not coming off anywhere near as annoying as characters of her archetype usually do. Josh Hutcherson also carries his role quite well, playing a boy with a strong imagination but crippling amounts of responsibility. The kids who played the supporting characters, such as school bullies and what-not, aren’t so notable. They’re your typical child actors, so I’m not going to rag on them for being underwhelming.

One of the film’s other lessons is one I felt rather strongly about: kids, use your freaking imaginations! In this age of video games where fantasies are mass-produced by corporations and kids are getting out and playing with each other less and less, a movie that comes along and inspires kids to play “pretend” is quite welcome. It was always my favorite game, growing up. The film captures what having fun as a kid and using your imagination is like, and as an adult whose not allowed to do that anymore, I almost found myself longing for simpler (and more fun) times.

So if you’re expecting sword, sorcery and epic quests from “Bridge to Terabithia”, I’m sorry, but you aren’t going to find them here. Now, if you have kids and you want to inspire them to go outside and play, then this is more up your alley.