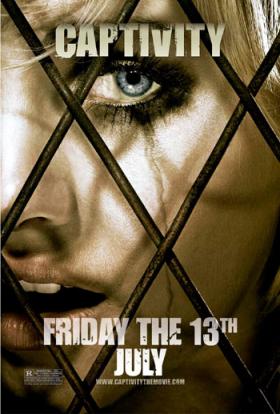 You know what the problem with trend-setting movies is? They set trends. As pointed out in my review for “Hostel Part II”, the new trend in Hollywood horror is faux-snuff films. While at times these can come out rather good, primarily, they’re pretty rotten. “Captivity” falls into the “rotten” category, as it tries so hard to be the next “Saw” but completely misses the point in the process.

Jennifer Tree (Elisha Cuthbert) is your typical spoiled and shallow super model who cares only about her own pretty face and how much she can party. This lands her in trouble as she soon finds herself imprisoned in a bizarre subterranean torture chamber, being monitored and manipulated by a mysterious and sadistic figure hiding behind the walls. Her only source of hope is the prisoner next door, Gary (Daniel Gillies), who isn’t any better at escaping the madman’s traps than she is.

“Captivity” is basically a Paris Hilton revenge fantasy brought to life on celluloid. From her hairstyle to her fru-fru dog to her loathsome personality, Elizabeth Tree is basically a carbon copy of America’s most despised and adored prissy princess. I detest Paris Hilton just as much as any other red-blooded American, but watching her look-a-like being tormented for an hour and a half does not make a movie. Not a very good one, anyway.

Director Roland Joffe’ shamelessly tries to emulate the appeal of the “Saw” franchise but shows that he just doesn’t “get it”. There’s more to the “Saw” films than just people getting tortured, such as an actual plot with multi-dimensional characters. “Captivity” is little more than a random string of gross-out torture sequences that, while a few are inspired, are utterly empty on the inside. Joffe’ eventually reveals the identity of Elizabeth’s tormentor and tries to throw in a shallow background and internal conflict to simulate something resembling “deep” characterization, but it all falls apart and feels more like a half-hearted afterthought.

If you’ve been waiting your entire life to watch a parody of Paris Hilton guzzle a pitcher full of pureed human flesh, then this is the movie for you. Otherwise, there’s just no appeal to this film. It’s a poorly conceived knock-off of a superior film franchise with all the depth, charm and intelligence of the blonde heiress they’re trying so desperately to zing.