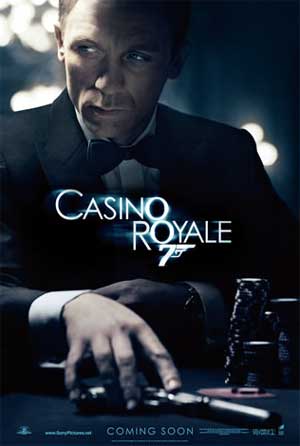 It has been eleven years since Goldeneye, the last good James Bond film, in my honest opinion. While the other Pierce Brosnan offerings had their moments, they felt more like generic over-the-top action films with the character of James Bond shoe-horned in as an after-thought, to the point of feeling like a self parody. It’s almost as if the various directors and writers had a checklist of James Bond-related clichés and were marking them off as they went along.

Casino Royale changes all that. After a decade of mediocre Bond installments, Casino Royale gets back down to the basics, and by that, I mean the very first Ian Fleming Bond novel and the genesis of the character.

M (Judi Dench), the director of MI-6 (England’s Secret Service) has just appointed a new Double-O Agent, James Bond (Daniel Craig), and is already regretting her selection. There’s a mysterious terrorist organization out there and MI-6 need to bring one of their henchmen in alive. Not an easy task, considering the terribly green 007 keeps botching his assignments. However, after getting something right, Bond is paired with the lovely Vesper Lynd (Eva Green) and sent to the Casino Royale in Monte Negro. There, Bond will engage the underground banker, Le Chiffre (Mads Mikklesen), in a high-stakes poker game where the pot is over one hundred million dollars. If Bond can best the professional gambler, Le Chiffre will be rendered broke and forced to divulge his secrets to MI-6 in exchange for protection from his enemies. If Bond loses, the money will go to the mysterious organization and England will have directly funded terrorism.

This is a very different sort of James Bond film and all the better for it. Despite the required high-octane action sequences, this is decidedly more low-key than most Bond films. There’s no ruthless supervillain out to take over the world, no doomsday devices…just Bond playing Poker with an evil French banker. And it really works, I must confess. After years and years of Bond being played up as a superhero, Batman in a tuxedo, it feels so refreshing to see the series get back down to legitimate spy-novel intrigue and suspense. There are plenty of thrilling action sequences and mind-blowing stunts, so don’t worry, Casino Royale is most certainly not just two hours of Europeans playing poker.

I don’t want to call this film a “prequel” since, in all honesty, it really isn’t. Although Judi Dench reprises her role as M from the Pierce Brosnan series, Casino Royale most certainly doesn’t fit in any timeline in regards to previous Bond adventures. If anything, it’s more along the lines of a “reboot” or a “fresh start”, reintroducing the character of James Bond to a new crowd and paying much better attention to his characterization from the original Ian Fleming novels. Casino Royale had been adapted once before in 1967, but that was as a parody film starring Woody Allen; few even consider it a “real” James Bond installment. So I wouldn’t go so far as to call this film a remake, either.

With this being touted as “the first James Bond adventure ever!” the audience is of course going to expect some sort of origin for the character. Just don’t be anticipating any sort of detailed history about Bond’s childhood or anything of that nature; this movie simply covers his first assignment as a Double-O Agent and the events which molded his character into the James Bond we recognize. So, as a result, this is a different sort of James Bond. He’s a whole lot meaner, getting his hands pretty dirty, and also tends to lose his temper over and over. He’s more personal, particularly with Vesper, and a lot less emotionally detached from humanity. His attraction to Vesper seems genuinely sincere, unlike Bond’s other female relationships where he’s basically just a “man-whore”. Bond also isn’t the Mr. Perfect we all come to view him as. He messes up. A lot. It’s really rather entertaining, seeing James Bond learn from his mistakes and gradually turn into the super-agent pop culture depicts him as.

Daniel Craig is a pretty good James Bond, all things considered. He plays Bond as a real character with faults and emotions, and not as a stereotype or self-parody. He does seem a little…”old”, though, considering Bond is supposed to be rather green in this film. Craig is 38 years old, so he’s not really that old, but he isn’t particularly young, either. I enjoyed his performance and I look forward to future offerings.

Casino Royale is definitely the best Bond film to come along in a very, very long time. It’s noticeably different than previous installments, but in a franchise that has become so stagnant, that’s honestly a good thing. I’d definitely recommend it to anybody with even a remote interest in James Bond. And if you aren’t interested in Bond, then I recommend you see the film, anyway, as it’s a fresh start and a good point to jump right in.