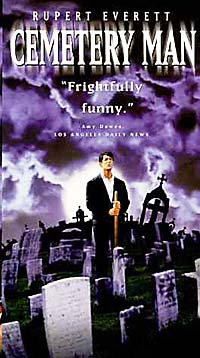 Made in Italy (with an English-speaking cast) back in 1993, Cemetery Man (also known as “Dellamorte Dellamore”) is a zombie flick that went under a lot of people’s radar. It’s honestly a good zombie film, though the zombies aren’t really the focus of the film. They’re an important element, for certain, but the movie is more a commentary on overcoming life’s adversities and taking control. Of course, it isn’t laid on quite as thick or pretentiously as it sounds, with the movie being packed with pitch-black dark comedy and surreal mental breakdowns akin to American Psycho.

Francesco Dellamorte (Rupert Everett) is a cemetery watchman whose life isn’t what he thought it would be; a boring existence of bland routine and the same scenery over and over and over. However, part of his nightly routine is exterminating the reanimated corpses of the recently deceased, called “returners”. Francesco goes about shooting them rather nonchalantly and just accepts it as part of his job description. His assistant, Gnaghi, is a mentally retarded fat oaf with a good heart who can’t speak anything outside of inarticulate grunts. Francesco falls in love with a widow and sees his life turning in the right direction, only to see her killed by the corpse of her departed husband. Francesco begins seeing the woman everywhere, yet his every attempt to be with her ends in tragedy. Meanwhile, Gnaghi falls in love with the severed head of a decapitated young girl and the pair move in together. Lamenting his existence, Francesco is visited by Death who tells him to take life in his own hands…with a Magnum.

Cemetery Man blends dark humor, zombie gore and social commentary into one of the better zombie flicks to come out in the 90’s (which was a rather dry decade for the genre). The dark humor is done at the expense of the dead on a constant basis and is really the kind of sense of humor you’d expect someone who works in a cemetery to have. Some of the gags are a bit over-the-top, veering towards the “silly” side; such as the motorcycle zombie and his bimbo. What’s really funny is watching Francesco’s life go wrong every time it looks up and him just taking it in stride or venting his frustrations on the returners. It really pays off at the end when Francesco finally loses it.

The zombies are done rather well with the effects being pretty exceptional. I particularly liked the bit where the zombie gets a crossed buried into the top of his skull and out his mouth. The scene where Death first makes contact with Francesco is very chilling and one of the best points in the movie; I really liked that Death puppet. There are a few instances of bad effects, mostly with the severed head of the Mayor’s daughter. The actress they got for the character also wasn’t very good, you could tell English wasn’t her first language.

Some people might not like the ending, as it is a little “artsy” and surreal, kind of in a Lucio Fulci or Dario Argento sort of way. To get the ending you really have to watch the film a second time and pick up on all the elements they were aiming for. Mainly because most people start watching the movie expecting a mindless zombie gore-fest and don’t realize there’s a deeper storyline until about halfway through, so you do miss a lot.

Cemetery Man isn’t for everyone but it is a good horror movie with more going on in it than your average zombie flick. I give it a B+ as there really wasn’t much wrong with it other than a few dodgy effects here and there.