Johnny Depp and the Chocolate Factory 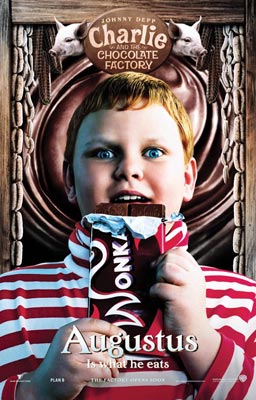 If that is all you wanted to know, then there you have it.

Despite this strange departure from the classic Gene Wilder portrayal of Willy Wonka, the movie stands as a great source of entertainment on so many levels. I have never seen the original Willy Wonka and the Chocolate Factory, so my view of its latest treatment will be devoid of old school nostalgia. As you may know, the movie’s premise is quite simple: billionaire confectionist Willy Wonka goes into seclusion after he is betrayed by his employees and reemerges some years later with the enticing prospect of allowing 5 lucky people to visit his chocolate factory. 5 golden tickets are stashed away within the wrappings of 5 ordinary Wonka bars and 5 children wind up discovering them. One of these children is poor young Charlie Bucket (played by Freddie Highmore), a little goody-good with just the right optimistic attitude to make it through his fairly impovershed life. And so the movie begins.

The movie delivers what you would expect from an end-of-summer release tooted as a summer movie: the visuals and cinematography are impressive, breathing a Disney-esque sense of wonder into Wonka’s chocolate factory. The music as well is Danny Elfman as his best, harking back to the goofy rhythms of Beetlejuice while setting foot into other genres during the Oompah Loompah scores. Oh, those Oompah Loompahs. If I were to pick one reason to justify the price of admission to see this movie, the Oompah Loompahs are most definitely it. Played individually by Deep Roy (yes, that is his name), the Oompah Loompahs are an ingenius use of digital and camera trickery and act as musical moralists during each of the children’s exit cues. Speaking of children, don’t let the presence of tykes dissuade you from seeing this movie: they’re not the annoying brats that one would expect to see in a movie such as this. The 5 children (with the exception of Charlie) act as dimunitive versions of every jerk, slob, and cynic that you may have known, whether in childhood or in your current state of growth. The casting of the movie is perfect.

Charlie and the Chocolate Factory was a welcome end-of-summer dessert that is pleasantly enjoyable at any time, just like Wonka’s world-famous candy.