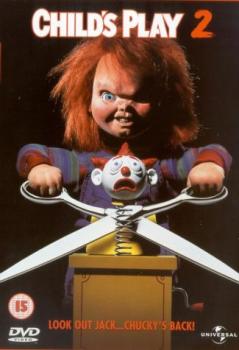 Is it bad that a horror series peaked by its second installment then went on to make three more films? Possibly, though not every Child’s Play fan will agree with me. Personally, I find Child’s Play 2 to be the best episode in the saga of Chucky: the Killer Doll, and while the follow-up installments may have their charm, they just can’t compare to this truly superior sequel.

Following the events of the first film, everyone thinks Andy Barclay (Alex Vincent) is completely mental. His Mother, who supported his claim that his Good Guy doll was possessed by Charles “Chucky” Lee Ray (Brad Dourif), the Lakeshor Strangler, and tried to possess his body, is tossed in a nuthouse and poor little Andy is sent to live with a foster family. Meanwhile, the corporation which produces the Good Guy dolls, fearing a conspiracy attempting to smear their product with bad publicity, manage to get ahold of the charred remains of Chucky. They rebuild the doll in an attempt to assertain the malfunction that caused the Barclay family to think it was trying to kill them and unintentionally bring Chucky back to life. Chucky picks up where he left off and is once again determined to regain his humanity by possessing Andy’s body.

Child’s Play 2 is an improvement over the original in just about every way, if you ask me. The puppetry effects are some of the best in the entire series, really making Chucky feel alive and dangerous. A real spotlight of the robotic effects is when he’s closing in on the injured school teacher while menacingly slapping the ruler against his hand. Indeed, a great number of sequences show him walking using nothing but robotics and he looks completely fluid and natural.

The kills in this film, while over-the-top, are some of my favorites. I particularly like the bit where the maintenance worker at the Good Guy factory gets his eye-sockets punctured with fake doll eyes. The entire finale to this film within the Good Guy factory is one of the strongest points in the whole franchise and one of the scarier sequences. The chase is actually rather exciting, allowing the audience to suspend their disbelief that you couldn’t just punt Chucky across the room and kick his plastic skull in. Chucky’s drive to get his hands on Andy is impressively psychotic, as he gradually loses body parts in the chase and replaces them with whatever’s convenient (a knife-hand, wheel-legs).

One thing that really sets this film apart from all the other installments is the music. Chucky actually has his own theme, a memorable melody ranking up there with the ones heard in Friday the 13th, a Nightmare on Elm Street and Halloween. It’s a great theme, and most regrettably, is never heard in any of the following films. A real shame, as it gave Chucky a creepier and more sinister presence.

Alex Vincent’s acting has also improved considerably since the last film, and he hardly delivers any painful one-liners at all. While he’s still a strong character, Andy remains a weak and fragile child. The supporting hero, his foster sister, adds an extra punch to the film. I kinda wish she had hung around for another installment.

I also feel compelled to mention that there are two versions of this film: the theatrical/home video version and the television version. The television version has various alternate scenes and additional footage added to fill the time that was cut from the removal of more violent sequences. However, the most note-worthy scene in the TV version is the alternate ending. In the film version, Andy and his foster sister simply leave the factory and the credits roll. In the TV version, after they leave, the camera returns inside the factory and shows Chucky coming back to life. This alternate ending conflicts with his revival in Child’s Play 3, though.

Child’s Play 2 is the best installment in the franchise, and though you may not like the sound of this, it’s all downhill from here. Part 3 is a rather humdrum installment, and while Bride was a fun one-shot self-parody gag, Seed just took things way too far.