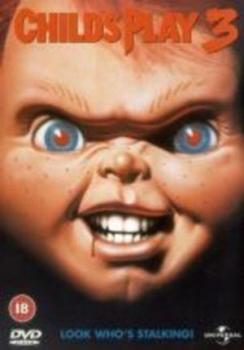 It has been eight years since the events of Child’s Play 2, and after nearly a decade out of production, Good Guy dolls are about to be reissued. While clearing out the old Good Guy factory and warming up the machinery, blood from Chucky’s headless corpse drizzles into the vat of liquid plastic and is forged into a brand new Good Guy doll. Alive once more, Chucky yet again seeks out his nemesis, Andy, who is his key to becoming human again. Andy, now a teenager, has been shipped off to military school. He befriends a young kid named Tyler but still has trouble fitting in. Chucky mails himself to the school and encounters Tyler after a mix-up with the post office. Realizing that with his new body he can now choose a new human to inhabit, Chucky makes friends with the young boy. Meanwhile, Chucky decides to settle his score with Andy, attempting to kill his foe while simultaneously wreaking havoc all over campus.

Probably one of the largest drawbacks of Child’s Play 3 is that Chucky doesn’t get very many memorable kills. I suppose the best of the bunch is when he tricks one of the military brass into going inside a garbage truck and crushes him. Some of the other kills are just weak, such as Chucky strangling a corporate CEO, replacing blank ammunition with live rounds so that people shoot each other, or surprising an old man and giving him a heart attack. While the heart attack bit was pretty funny, the kills all really lacked creativity and bored the hell out of me.

What this film does contain is some of Chucky’s best one-liners. I’m rather fond of “Don’t **** with the Chuck”, myself. Brad Dourif provides another delightful voice over as the main villain and is really the film’s only redeeming value.

One thing I lament most is that the theme from Child’s Play 2 didn’t make the transition into this sequel. Child’s Play 2 had a very creepy, memorable theme, while this film instead has some generic military music.

The ending of the film is probably the best part. Chucky takes Tyler hostage and Andy chases them into a carnival horror ride. They scale this fake, indoor mountain with all sorts of horror themed special effects going on around them. At one point, while Chucky is trying to take over Tyler’s body, the scythe of a big mechanical Grim Reapher swoops down and shears off half of Chucky’s face. Maybe the coolest part of the movie, which I suppose isn’t saying much, since that scene lasts only a handful of minutes.

Child’s Play 3 isn’t my least favorite installment in the franchise, but it is one of the weaker entries. It finishes Andy’s storyline rather well and makes way for the next arc of the franchise: Chucky’s family life. If you’re not a big fan of the direction Bride of Chucky took the series then you might just want to quit after this movie, as its Chucky’s last solo adventure.