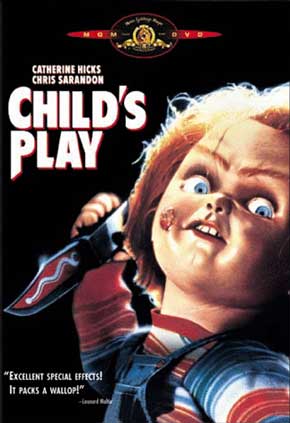 Puppet Master, Dolls, Demonic Toys, Trilogy of Terror…there are plenty of “killer toy” movies out there (90% of which are produced by Charles Band) but few have the shear lasting power of the Child’s Play franchise. What is it about Chucky that sets him apart from all the other evil dolls and murderous toys? Is it the one-liners? Or is it that, at least early on in the franchise, there was an actual strength to the story?

Andy Barclay (Alex Vincent) wants nothing more for his birthday than a Good Guy doll, the hottest selling toy on the market. His mother (Catherine Hicks), however, just doesn’t have the cash. Elsewhere, Charles Lee Ray (Brad Dourif), the notorious Lakeshore Strangler, is on the run from the cops. He evades capture by hiding inside a toy store. However, Officer Mike Norris (Chris Sarandon) follows him inside. They have a brief shoot-out and the Lakeshore Strangler is mortally wounded. Desperate, he grabs a nearby Good Guy doll and blurts out a voodoo incantation. Lightning strikes the toy store and Charles Lee Ray falls to the floor, dead. Or is he? A short while later, Ms. Barclay purchases a Good Guy doll from a bum and gives it to Andy. Andy becomes attached to “Chucky” and claims the doll is speaking to him. Soon, mysterious deaths begin to happen as all those responsible for the death of Charles Lee Ray are brutally murdered. At the scene of each murder are Andy and Chucky.

When I was a kid, Chucky scared the crap out of me. I’ll admit it. Now ‘n days, with the Child’s Play franchise having tumbled down into the realm of self-parody horror-comedy, I wonder what the Hell I was ever so afraid of. Chucky’s a lot less frightening when you’re an adult and you know you can just drop-kick that son of a bitch, but when you’re a kid, it’s a little creepier since you’re on the same size scale.

One thing I appreciate about the Child’s Play franchise, even when it went downhill with the horror-comedy, is that it maintains nearly flawless continuity between each installment. That may not sound like much, but when it comes to B-rated slasher flicks, continuity is typically completely optional. You can thank Don Mancini for the excellent continuity, as he has written every single installment in the film series to date.

The robotic puppetry effects are pretty ahead of their time and you actually get the feeling that Chucky is alive. A large part of that effect is thanks to an awesome voice-over from Brad Dourif. You might recognize him as a character actor in a ton of movies, most notably, as Wormtongue in Peter Jackson’s Lord of the Rings trilogy. Still, I’ll always recognize him as “Chucky, the killer doll”. The special effects would improve over time, though as it is, these are pretty good. I especially like the bit where Chucky, burnt to a crisp, walks angrily down the hallway of the Barclay’s apartment as his limbs are being blown off by a handgun.

As much as I like the original Child’s Play, it is not the best film in the series. That honor goes to Child’s Play 2, but I’ll save that for another review. Child’s Play 1, however, is a pretty good horror flick that, unfortunately, gets less-scary with age.