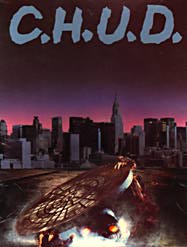 The title to this movie is actually an acronym standing for “Cannibalistic Humanoid Underground-Dwellers”. How can you NOT want to see this movie? Well, what if I sweetened the deal by telling you that Daniel Stern is the action hero?

Alright, it may not *sound* like a very good movie, and to be frank, it really *isn’t* a very good movie. C.H.U.D. is really only going to appeal to the Troma and Mystery Science Theater crowds who thrive on horror movies of the bad, silly and incoherent varieties.

The plot is what you can expect from the title and the tagline “They’re not staying down there any more!” Basically, some corrupt government officials in New York City have been dumping toxic waste deep in the labyrinth of sewers and subway tunnels beneath the city. What they didn’t expect was that the radiation would mutate the homeless people living down there into “Cannibalistic Humanoid Underground Dwellers”. The C.H.U.D.s are bald, razor-toothed rat-people with luminous eyes and extendable necks (kind of like Mekaneck from He-Man!). They make their way to the surface and begin to eat old ladies who foolishly walk their poodles down dark alleys at 3 in the morning. And only Daniel Stern can stop them!

No, seriously. He runs a shelter for homeless people who are complaining about being eaten. He looks into it and finds himself locked in the sewer with the C.H.U.D.s by some government spooks who think he knows too much. Oh, and keep an eye out for a cameo by John Goodman as a police officer. Well, for about 5 minutes before something kills him.

The story sounds quirky enough to be entertaining, but my plot synopsis is actually rather misleading. The Cannibalistic Humanoid Underground Dwellers are regarded more like a subplot to the movie, as the government conspiracy and some tripe with a detective trying to uncover the mystery actually absorbs the bulk of the screen-time. The monsters from the title are hardly ever seen, thanks to a desperately low budget, and the big climax of the movie centers on the evil politician receiving justice rather than the monsters being vanquished from the sewers.

It’s for this reason that C.H.U.D. is really such a bad movie. And to be very honest, it would benefit from a remake a great deal more than any of these other horror remakes Hollywood has been dishing-out on a monthly-basis.

C.H.U.D. is a movie that never lives up to the potential of its own title, and therefore can’t earn more than a D+ from me.