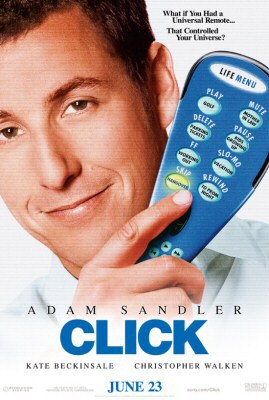 You know, there’s one thing they don’t tell you in the commercials for this Adam Sandler-driven comedy: Click is, in reality, a remake of “It’s a Wonderful Life”. I suppose nothing is safe from remakes in Hollywood these days, but this really came out of left field. On the bright side, I have to admit, the writers put a real twist on the It’s a Wonderful Life concept, making it less of a remake and more of a “re-imagining”.

In this story, Adam Sandler plays an overworked father and couch potato named Michael Newman. His life is boring, exhausting, and despite all the good things he does, he can never catch a break. One night, while looking for a new universal remote at a Bed, Bath & Beyond, he stumbles upon the “Beyond” section and meets a mad scientist played by Christopher Walken. The scientist offers him a universal remote than can control his entire universe. Sandler wastes no time in using the powers of the remote carelessly, fast forwarding through “boring” parts of his life so he can get straight to the rewards; all at the expense of alienating himself from his family. However, the remote turns out to be self-programming, and before he knows it, his life is almost over. And while he is a successful businessman towards the end, he no longer has a loving family to show for it.

The idea of controlling reality with a remote doesn’t sound very clever, we’ve all wished we could shut someone up with a “mute” button or “fast forward” through a work day, etc. However, the director (Frank Coraci) manages to craft numerous gags revolving around the concept that are both expected and clever. He uses functions like “picture on picture” to watch a baseball game while his wife nags at him, the “menu” key to select audio commentary about moments in his life, the “chapter” selection to highlight his greatest moments, and so on. It’s mostly very unique and you won’t see a lot of the jokes coming.

However, the movie seemed rather mis-marketed as a comedy. It’s funny for about the first half until Sandler realizes the consequences of abusing the remote and putting work and success before family and friends. After that, it becomes rather depressing as his life spirals out of control and his family ceases to love him. There are many moving scenes, the best being his last interaction with his father (Henry Winkler) before he passes away from old age. This is where the “It’s a Wonderful Life” angle really starts to become obvious. The “serious” half of the movie is done rather well, but it leaves the film feeling pretty uneven; you were promised a comedy but “duped” into seeing a drama. Also, Adam Sandler just doesn’t do “serious” very well, and often times the scenes that are supposed to be pulling at your heartstrings have you rolling your eyes, because Sandler just sounds like he’s doing another one of his goofy characters.

Click isn’t a terrible movie, and it’s honestly not a bad re-imagining of It’s a Wonderful Life. The movie is just very unbalanced and for something marketed as a comedy, isn’t always that funny. It gets a C. A decent film, but nothing you’re really gonna remember.