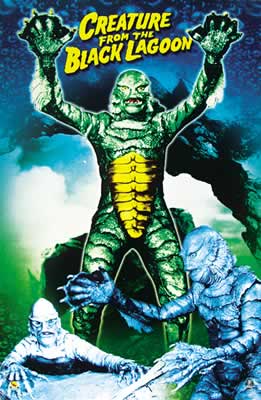 The Gillman doesn’t seem to get the same amount of respect or recognition as Universal’s other horror icons, like Dracula, Frankenstein’s Monster or the Wolfman. And I suppose it has to do with the fact that, honestly, “Creature from the Black Lagoon” isn’t quite as good or classic a film as the ones previously mentioned. Never-the-less, it is a fun horror movie perfect for a Halloween marathon and completely suitable for the kids.

On an expedition deep within the darkest recesses of the Amazon, Dr. David Reed and his team stumble upon a cursed place known as “the Black Lagoon”. An eerily beautiful location, the Black Lagoon is chalk-full of fossils and other ground-breaking archeological and ichthyological finds. However, lurking beneath the depths is a humanoid fish creature who doesn’t like to be bothered. David is fascinated by the creature and wishes to study it alive, however, his colleague, Dr. Mark Williams, wants to kill the beast and take it back for publicity. The Gillman (as he is quickly dubbed) does not approve of either option and traps the research team within the Black Lagoon so that he can pick them off one-by-one.

While the Gillman is one of my favorite Universal horror icons, he just doesn’t have that timeless quality other Universal monsters have. Still, he has a very memorable design. The suit they made for him is excellent; extremely detailed. I particularly like the clawed flippers on his hands and feet. The actor portraying the Gillman also does a great job during the underwater sequences, swimming around in a way which is very inhuman but believable at the same time.

I suppose what makes this movie the most entertaining are the numerous underwater action sequences, which to the film’s credit, are performed frightfully well. The scuba divers blast the Gillman with harpoons and spray-guns, wrestling around with the beast in a very other-worldly environment. On a few occasions there’s so much tumbling around, oxygen bubbles and kicked up mud that you lose track of what’s going on and get confused, but that doesn’t happen too often.

On land the Gillman isn’t quite as intimidating; lumbering about with his arms out-stretched like a bad Frankenstein or zombie. There is one scene on the boat, though, which I found to be particularly cool. They hurl an oil lamp at the Gillman and he catches of fire, runs around then dives back into the Lagoon. Pretty well done.

As far as classic Universal movies go, Creature from the Black Lagoon is perhaps my third favorite, trailing behind Frankenstein and the Wolfman. I’d recommend it to just about anyone, as it’s one of those classic horror films you should see at least once in your lifetime.