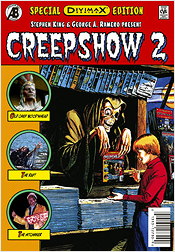 Stephen King and Tom Savini return to bring you another collection of gruesome, psychotic, gore-filled horror stories. Though a decent follow-up to the original classic, Creepshow 2 doesn’t have as many shocking moments or memorable stories to match its predecessor.

This time around, our host, the Creep, has become more like the Crypt-Keeper from the EC anthology horror comics of which he was inspired, narrating between stories and providing us with bad puns and commentaries. He brings us only 3 stories for this installment, as opposed to the 5 from the last chapter. In “Old Chief Wooden-Head”, a cigar store Indian comes to life and seeks vengeance on a murdering teenager and his gang of hoodlum friends. In the movie’s best installment, “The Raft”, a group of idiotic teenagers become stranded on a raft in the middle of a lake, gradually being picked-off by a black gooey creature that eats flesh. In “The Hitchhiker”, a cheating wife mows down a man on the side of a highway and doesn’t stop. The corpse of her victim follows her home for some revenge.

The stories in this installment are definitely inferior to the stories in the original. Despite that, a few of them are quite good. “Old Chief Wooden-Head” is the weakest link in the film, not being very scary or exciting. The kills aren’t particularly thrilling, either. Now, “The Raft”, on the other hand, is a great piece of horror pitting a group of teens in a truly frightening situation. The effects as the oily monster dissolves their flesh is extremely nasty and terrifying. The race at the end between the tar-creature and the last teenager is a great moment of suspense, and the pay-off is golden. The last story, “The Hitchhiker” is a pretty boring concept but made interesting through some gloomy directorial flare. Nothing to write home about, though, as it just boils down to “woman being attacked by angry black zombie”.

The wrap-around story is told with Saturday morning cartoon-style animation, which feels pretty out of place and almost embarrassing. The wrap-around story once again features Billy (the kid from the first film’s wrap-around story, though played by a different actor) wreaking a horrible revenge on the people who push him around. This time, he’s taking out a bunch of bullies. Not very scary or surprising (hard to top Creepshow 1’s voodoo doll), and the over-use of animation won’t leave you particularly frightened.

Creepshow 2 is a pretty average horror movie, albeit with a fantastic middle segment, but made worse by being a follow-up to one of the finest horror movies ever. It gets a C. The only thing really worth tracking this movie down for is “The Raft”.