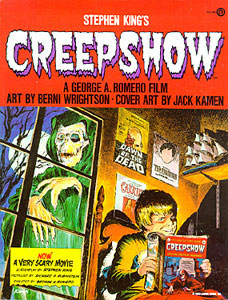 Personally, this film ranks in my top 5 horror movies. Stories by Stephen King, directed by George A. Romero and with gore effects by Tom Savini. Throw in actors like Leslie Neilson, Ted Danson and Ed Harris, and this movie was born to be perfection.

An anthology horror movie collecting 5 tales of terror inspired by the old EC horror magazines (Tales from the Crypt, Haunt of Fear, Vault of Horror), Creepshow delivers in nearly every installment. “Father’s Day” is a tale about the corpse of a dead old man rising from the grave one Father’s Day to seek vengeance on a group of free-loading kids who caused his death. “The Lonesome Death of Jordy Verrill” chronicles the last day of a dim-witted hillbilly who touches a meteorite that causes grass to grow out of his body. “Something to Tide you Over” has a psychotic Leslie Neilson burying people on a beach right before high-tide, and said people coming back from the dead to take their revenge. “The Crate”, possibly the most memorable installment, has a janitor and a college professor find a mysterious crate beneath a stairwell in a campus basement. Inside the crate, however, is a man-eating monkey-like monster. “They’re Creeping up on You”, starring Ed Harris, tells the tale of a greedy germophobic old man who is gradually over run by a plague of cockroaches.

The tales are broken up with a wrap-around story about a kid named Billy seeking vengeance on his abusive father. All the stories are brought to us by the Creep, a silent zombie-like figure, in brief segments of surreal animation. The animation is used sparingly and the Creep is, well, very creepy. The surprise-ending is satisfying, as well.

Almost all the stories are fantastic. “Father’s Day” is a bit bland, though the screaming rantings of the elderly zombie is worth the time spent. “The Lonesome Death of Jordy Verrill” is brilliantly disturbing. Just the thought of grass and fungus sprouting out of your body is enough to make the flesh crawl. Stephen King stars as the title character, and wouldn’t you know it, the guy can act surprisingly well. The ending betrays the almost tongue-in-cheek approach to the story, by being quite depressing and morbid.

“Something to Tide you Over” is interesting for the way Leslie Neilson kills Ted Danson, and the thought of being helpless as the tide slowly drowns you is quite unnerving. The zombies seeking vengeance at the end, however, is a bit redundant thanks to “Father’s Day”. “The Crate” is the best installment in the flick. Savini’s gore effects are top-notch, and when that beast first pops out of the crate, holy crap! The story keeps your interest with a plot about a college professor considering using the beast in the crate as a means to bump-off his obnoxious wife. A magnificent horror story and typically the part people remember best of this movie. The last installment, “They’re Creeping Up on You” will make you feel all squirmy thanks to the thousands of LIVE cockroaches used in the story. No CGI here; this was all real. It’ll mostly gross-out those who have a hard time handling bugs, and even if you don’t, you’ll have a new-found respect for Ed Harris as he lets himself get buried in an avalanche of the little creeps.

Romero’s directorial style has a very dynamic flare, with him using colorful lighting behind screaming heads and a panel-style of transition to simulate the feel of an old pulp comic. Savini’s effects are at their finest and you’ll love every drop of gore he lets loose.

Just about everything in this movie is perfect, and Creepshow truly is an essential horror film.