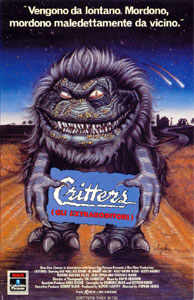 Who remembers the “killer little animal” fad that Gremlins started in the 80’s? I sure do. Thanks to that fad we got the likes of Troll, Ghoulies, Munchies and, possibly the most successful knock-off of them all, Critters.

A gang of “Crites” (or as they’re known, “Critters”) escape an outer-space zoo/prison and make their way to Earth. The movie’s tagline “You are what they eat” is poetically accurate, as the Critters eat their way through a small Midwestern town. And to make matters worse, the more they eat the bigger they get. These killer fluff-balls can roll up like armadillos to chase their prey, shoot drugged needles out of their backs like harpoons and eat just about anything. The Critters decide to start their feast with the Brown family, and successfully traps them in their isolated farmhouse. The family’s only hope is a pair of violent, shape-shifting bounty hunters from outer space.

The movie is as awesome as it sounds. Very awesome. It’s a dark comedy, and surprisingly gory for PG-13. The Critters eat a wide variety of live stock and human beings, and it’s damn funny. Hell, they eat a mullet-sporting Billy Zane. That’s worth the price of admission all on its own.

The special effects range from “impressive” to “I can’t stop laughing”. The Critter-puppets are gruesomely detailed, especially the giant one that shows up at the end, and the shape-shifting effects on the bounty hunters is pleasantly professional. However, what you’re going to remember best is a shrieking Billy Zane holding a ball of fur against his stomach and rolling around a haystack in spasms. All that and Critters is nostalgically 80’s, especially with all the fake music videos and hair metal.

Of all the Gremlins cash-in franchise of the 80’s and early 90’s, Critters really is the only one worth a damn. There were 4 Ghoulies installments, and only 2 and 3 are any “good”. Somebody sold their soul and we wound-up with 3 Munchies movies, with 2 of the movies being kid-oriented vomit. Then there’s the Troll trilogy. It’s best we don’t talk about that.

No, Critters and its 4 episodes really is one of the more underrated horror franchises of the 80’s. Critters managed to gain some level of popularity in the early 90’s thanks in large part to near-endless reruns on the Sci-Fi Channel (where I first saw it), resulting in a cult following of sorts. Hell, New Line even gave it a friendly jab in Teenage Mutant Ninja Turtles the Movie.

Critters is a guilty pleasure in the “so bad its good”-category. A B-movie to the core, which is exactly the grade it deserves; a B. To quote Raphael, “Where do they come up with this stuff!?”