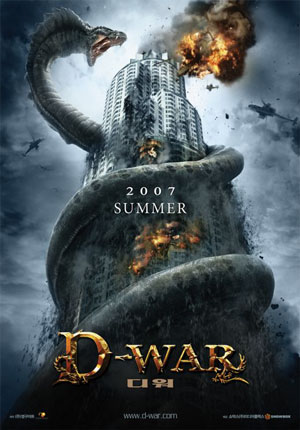 “Dragon Wars” is a peculiar animal. When I saw the first TV spot I figured it was for another Sci-Fi Channel Original Movie like “Mansquito” or “Boa vs. Python”. I had no idea that this thing was actually going to get a national theatrical release when it looked, felt and smelled like something brewed for the straight-to-video market. To my surprise, the movie was still bad, but it wasn’t Sci-Fi Channel bad. It was cheesy and stupid with poor effects and even poorer acting, but there was something about it that was just kind of cool.

Oh yeah, it was the dragons.

According to an ancient Korean legend, two dragons (one good and one evil, naturally) will wage a war every five hundred years for the soul of a special human which will grant them passage to the heavens to be reborn as a Celestial Dragon. Baraki, the evil dragon, has summoned his army of demonic followers to hunt down Sarah (Amanda Brooks), the bearer of the ancient power. Her reincarnated guardian, Ethan (Jason Behr), has made it his job to protect her…from gigantic eighty story-tall serpents that eat helicopters. Good luck with that.

The story for the movie is so thin, empty and obvious that one would think it was originally conceived as a Saturday Morning Cartoon geared to sell a “D-War” toyline. Indeed, the characters and monsters all seem like they stepped out of a two-dimensional toy commercial/cartoon from the 80’s and don’t really try to get any deeper than that. Even if writer/Director Hyung-rae Shim had received a bigger budget, this movie would have only been marginally improved.

Still, the effects surprised me. They’re better than most of the CG debacles that the Sci-Fi Channel pumps out on a monthly basis, but a far cry from anything that deserves to be shown in a movie theater. The dragons all look pretty fake, but what manages to make the scenes involving them watchable isn’t so much the special effects as it is Shim’s cinematography. It’s very dynamic, exciting and thankfully doesn’t imploy “shakey cam” techniques too often. So even when the monsters look like they stepped out of a Playstation 2 game, the camera work during the action sequences and the epic scale of a few of the shots makes them…acceptable.

Obviously, no one is going to see this movie for the sappy love story or any of the cardboard humans. When you’re lead human villain looks so much like Steve Martin that it distracts you from giant screaming behemoths, then you know there must be a casting problem. The action in “Dragon War” is honestly kind of satisfying if you can get past the sub-standard special effects. My various Godzilla reviews on this site should give you a hint that I’m partial to movies where giant monsters plow through cities, so I was rather pleased with what I got. The final battle between the good and evil dragons at the film’s climax was admittedly pretty sweet.

I can’t recommend that you pay $10 bucks to see this in the theater. Under normal circumstances, giant monster movies are always better on the big screen, but “D-War” reeks of a straight-to-video flick that somehow got lucky. So wait to rent it if you really want to watch it.