Daredevil Should Have Dared To Be Something More 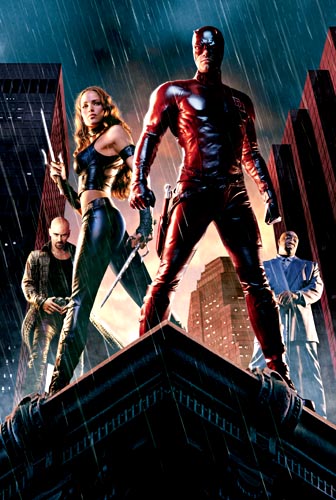 Matt Murdock (Ben Affleck) grew up on the tough streets of Hell’s Kitchen and was one day blinded by toxic waste. Though he lost his sight, his other senses were augmented to superhuman status. Now as a blind lawyer in Hell’s Kitchen, he upholds the law and seeks justice: but when that fails, he rams justice down your throat as the vigilante known as Daredevil.

Mark Steven Johnson’s Daredevil is a foray into making a comic-book movie using a checklist of things you have to have. You have to have the leather costumes, the quasi-Matrixized fight scenes, the moral of the tale, and of course a soundtrack by today’s leading artists. Forget acting and probability for a moment and you basically get Daredevil, the most pedestrian of comic-book movies possible.

The film does start out solidly in explaining Matt Murdock’s origins, his father’s sins, and his desire to be the masked avenger of Hell’s Kitchen. But once we fast forward to the present, the movie’s problems begin to rear the ugly head of Jennifer Garner. I mean, Daredevil was pretty awesome throwing dudes in front of subway trains and skating down rails using thugs while obnoxious Nickelback music blasted in the background. But fighting a plain-Jane lady on see-saws in the middle of broad daylight while kids are watching just so you can get her number? Spare me. And then they do the nasty! If only they left out Jennifer and the whole Elektra character, this movie would have probably been a lot better. But considering how important Elektra is in the comics, leaving her out would have probably not been pleasing to the fans. Oh well. At least they made Wilson Fisk (a.k.a. The Kingpin) black (Michael Clarke Duncan). And Bullseye (Colin Farrell) really shines as a supporting character.

To its credit, I find the movie immensely rewatchable and, on typing this review, I was shocked to discover that I’ve probably seen this movie a good seven times. While not being the most stellar example of how to make a great comic-book movie, it does cover all the bases to the point where it is visually entertaining and a good time-waster.