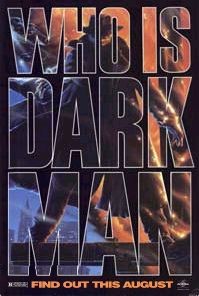 I’m 21 years old (at least as I write this review) and I just *now* got around to seeing Darkman. I’ve always liked Sam Raimi’s films, particularly the Evil Dead and Spider-Man franchises, and I’ve seen bits and pieces of the various Darkman films (there’s 3 of em) on the Sci-Fi Channel and the USA Network ever since I was a kid, but I just never got around to sitting down and watching any of them all the way through.

Man, was I ever missing out. Despite not being based on a comic book, Darkman is a definite superhero flick. The Danny Elfman score gives off a Batman-vibe (this was made one year after Tim Burton’s Batman film) and really puts the “dark” in “Darkman”. But before I go all into the details of what made this such a good action flick, let me cover the plot…

Dr. Peyton Westlake (Liam Neeson) is a scientist trying to create a synthetic skin for disfigured people and what-not. However, after 99 minutes, the masks always dissolve unless they’re kept in the dark. A mobster named Durant breaks into his lab in search of a document that would incriminate his employer. Durant beats Westlake within an inch of his life, disfiguring his hands and face and dunking him in a vat of the synthetic skin compound. Then, to top it all off, he blows up the building, sending Westlake’s flaming body flying into the river. Westlake is found (though completely unidentifiable) and brought to a hospital, where doctors remove the vast majority of his nerves so that he would not die from the shear pain of his predicament. This leaves the horribly disfigured Westlake cut off from the real world, unable to feel anything and unable to keep his adrenaline in check (giving him enhanced strength). Westlake breaks out of the hospital, rebuilds his lab and plots his revenge on Durant and company by using his synthetic skin equipment to disguise himself as anyone he chooses.

Darkman’s origin is covered in the first half hour of the film and the rest is pure action. The action sequences in the film are high-budget and remarkably believable. Scenes where Darkman dangles from a helicopter in flight or leaps from girder to girder atop on construction site are all extremely well done. Save for a few bad bluescreen effects, anyway.

Sam Raimi’s directorial signature is all over this movie. His trademark use of dark humor and slapstick are all present, though not as in-your-face as, say, Army of Darkness. Raimi’s insane imagination really brings Darkman to life, particularly the way he portrays Darkman’s anger; Westlake goes into a fit of screaming as the environment around him crumbles apart and a series of overlaid images show his brain catching on fire with rage. It’s funny, cool, insane, scary and all-around memorable.

It’s a very fun, very well-made action flick perhaps betrayed only by the bargain-bin price of the DVD. I picked mine up at Beast Buy for $6.99. Most DVD stores stash it in the “$10 and Under” section next to crap like Vegas Vacation and It’s Pat: the Movie. Don’t let the extremely affordable price-point fool you, this is one of the better action movies of the early 90’s that gets overlooked a little too often. Hell, *I* overlooked it for most of my life.