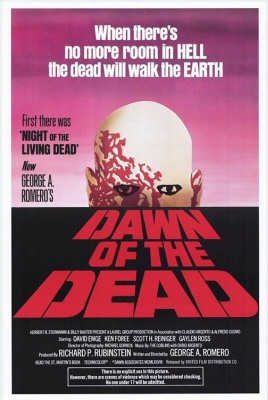 Next to its predecessor, Night of the Living Dead, George A. Romero’s Dawn of the Dead is one of those “mandatory” zombie flicks which basically paved the way for the entire zombie genre and *still* influences the movies and media to this day. In addition to its historical value to horror cinema, it’s just a damn good movie.

Following the events of Night of the Living Dead, corpses have mysteriously come back from the grave to feast on the flesh of the living. They have overwhelmed humanity, causing outbreaks of chaos and carnage nation-wide. Hoping to find refuge from the walking dead, 4 associates; the helicopter pilot, Flyboy, his girlfriend, Fran, and the SWAT members, Peter and Roger, escape the big city via helicopter in search of a place free from zombies. They discover an abandoned shopping mall and decide to make it their new home. What comes next is the challenge of exterminating the zombies within the shopping mall and turning it into some place livable. However, their greatest enemy may not be the living dead.

There are three versions of this film available: the US Theatrical cut, which is most prominent, and runs for 127 minutes, the Extended cut, shown at the Cannes Film Festival, which runs for 139 minutes, and the European cut, more commonly referred to as “Zombie”, which runs for 113 minutes. Of the three versions, I prefer the European cut over the rest, as it skips over most of the throw-away sequences (without skimping on the gore) and allows the film to flow much smoother. It also features the full score by Dario Argento and Goblin (Suspiria), a very haunting and eerie collection of music, which is much better than the other versions, which use bland stock music.

One of the aspects of Dawn of the Dead which receives so much praise is the social commentary on consumerism in America. Despite being dead, the need to flock to shopping centers is so instinctive in modern human beings that zombies swarm shopping malls even though they can’t buy anything or do anything. Personally, I think the message is a bit pretentious, but thankfully Romero doesn’t go nuts trying to beat the audience over the head with it. There’s also the same message delivered in all three installments of Romero’s Dead Trilogy; that zombies aren’t the biggest threat to the world, but humanity’s complete and utter inability to get along no matter how serious the circumstances.

Tom Savini’s special effects are both excellent and poor at the same time. I, personally, don’t consider Dawn of the Dead to be his finest work, but it’s possibly due to the incredible scale with which he had to produce the gore effects. My first complaint is that most of the zombies are just people with white face paint on. I know they’re supposed to look like pale, freshly dead corpses, but they don’t. They look like people covered in white face paint. Then there’s the blood mix, which is a bright candy apple-red instead of the proper crimson. Why he went the ketchup route over the convincing route baffles me. Now, these complaints aside, the special effects in Dawn of the Dead are exceptional. Many of the more rotten zombies look gorgeous in their grotesquery, while the scenes of graphic violence (machetes to the head, bites to the arm, neck and leg) are convincing as Hell. There’s also the required “feasting” scene where the zombies rip several living humans to pieces and eat their flesh. Magnificent.

The lead characters are well-rounded by the film’s conclusion. You’ll start the film hating Flyboy, but as the story progresses, he eventually proves himself and earns the audience’s respect. Roger and Peter are the usual favorites of the bunch, as they’re the kickass soldiers who know how to blow the zombies to bits. Then there’s Fran, probably the weakest of the set, though her moral dilemma over pregnancy in a world close to Armageddon does get one to think. There’s also the “villain” of the movie, Blades, played by Tom Savini. A bit of a cult classic character, he even manages to make a comeback in Romero’s 4th installment in the series, Land of the Dead.

One thing I love about this film, as well as Night, is that it offers the most believable and, honestly, “accurate” depiction of what would happen if zombies *did* exist. At least, in the 1970’s, any how. The entire focus on the media reaction, the arguments over zombie rights, people unwilling to give up their dead or not willing to shoot their loved ones after they’ve come back has a stark reality to it, giving the film some credibility beyond “just another horror film”.

Aside from some lackluster effects, Dawn of the Dead really is a tremendously satisfying and exciting horror film. I’ve met very few people who didn’t enjoy it. I have to give it an A-, certainly one of those “required viewing” titles.