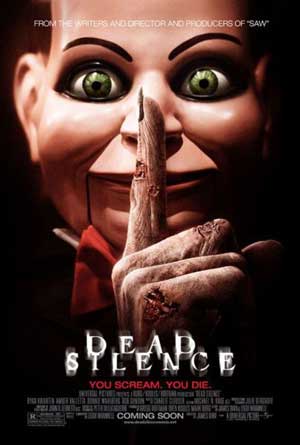 When I was in elementary school, the most popular kid’s books at the time were R. L. Stein’s “Goosebumps” series. One volume in particular always managed to freak me out just by looking at the cover; “Night of the Living Dummy”. As you can presume, it was about a ventriloquist dummy coming to life and attacking people (not “killing”; these were kids books after all). It capitalized on the only sub-genre of horror movies that managed to actually scare me when I was little: “Killer Dolls”. Vampires, zombies, ghosts, aliens, slashers…I loved all those sub-genres, but they never scared me. Movies about killer dolls and toys, on the other hand, freaked me out something fierce. So, of course, I became quite excited when the movie posters and trailers for “Dead Silence” started showing up in theaters. It’s been a long time since I’ve seen a good killer doll movie.

Many years ago, in a small town, a ventriloquist named Mary Shaw (Judith Roberts) was suspected of the murder of a local child. She was killed by the angry townsfolk in secret and buried with her ventriloquist dummy collection. Shortly after her death, all those responsible as well as all those related to those responsible were found murdered, their tongues cut out of their mouths.

One day, Jamie Ashen (Ryan Kwanten) is delivered a mysterious package containing a creepy ventriloquist dummy named “Billy”. When Jamie’s wife (Amber Valletta) is murdered and her tongue cut out that same night, Jamie heads back to the small town of his birth to uncover the truth behind Mary Shaw. When he gets there he finds that not only is Mary missing from her grave, but all 100 of the dummies buried with her are as well. Oh crap.

If you’re expecting something along the lines of “Child’s Play”, “Dolls” or “Puppet Master”, killer dummies running around with butcher knives via puppetry, stop-motion or CGI, then I’m sorry to disappoint you. While these killer dummies are most certainly alive, they don’t get up on two legs and run around in circles. The killings are all performed by the grotesque spirit of Mary Shaw; the dummies are really just there to set the mood and freak the audience out prior to Mary’s arrival. In that respect, “Dead Silence” is less of a killer doll movie and more of a ghost/slasher fusion. If anything, it reminded me of “Darkness Falls” a bit too much. However, I can assure you, it was much better than “Darkness Falls”.

I will admit, keeping the dummies from running around like midgets and killing people was actually a wise decision. It kept the film from turning campy in the wrong way, drawing the scares from the dummies in a more subtle and effective method. You know, the usual “glass eyes follow you around the room” bit. Ventriloquist dummies are by nature extremely creepy-looking, so just having their own screen presence was adequate enough.

“Dead Silence” isn’t a terrible horror movie, and it’s certainly more inspired than a lot of the other dreck that gets pumped out these days, it just doesn’t stand out all that much. As I already mentioned, the premise of “old ghost story draws main character back to haunted town to face childhood fears” is nothing new and has been beaten to death in recent years. “Boogieman”, “They” and the aforementioned “Darkness Falls” all came first and are all quite similar. Originality or lack-there-of aside, “Dead Silence” is a ways better than those other movies. I wouldn’t recommend buying the thing on DVD, but it’s definitely worth a rent.

The movie struck a chord with me since I’ve always been drawn to killer doll movies, and considering March isn’t exactly the prime month for horror movies, if you’re looking to go see a scary flick this is kind of your only option right now.