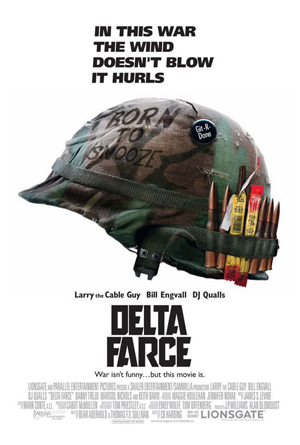 So Larry (Larry the Cable Guy), Bill (Bill Engvall) and Everett (DJ Qualls) joined the Army Reserves since they figured they’ll get a free weekend of goofing off once a month. However, their do-nothing dreams are shattered when Uncle Sam ships them off to Iraq to battle in the War on Terror. As fate would have it, these three stooges didn’t quite make it that far, being accidentally ejected from their plane over Mexico. Too dumb to know any better, the Redneck Regiment is quickly enlisted by the locals of a small village to liberate them from the oppression of a gang of gun-toting banditos. Mistaking them for Al-Queida (because all them mud-colored peoples looks the same, GIT R DONE!!), the group gets to work with hilarious results. But unbeknownst to them, their tough-as nails drill sergeant, Sgt. Kilgore (Keith David), has followed them to Mexico and when he finds them he’s gonna kill em.

I’ve seen some bad comedies this year (“Norbit”, “Kickin’ It Old Skool”), but I can say with confidence that “Delta Farce” is the worst comedy I’ve seen in my entire life. It goes beyond the realm of “not funny” to the point of just insulting your intelligence, much more-so than most redneck comedies. You’re $10 bucks would be better spent on a hobo under the one condition that he gives you the finger in exchange.

There are two types of comedy I hate, both in stand-up and film form: stale black comedy about how evil white people are, and dimwitted trailer trash redneck comedy. It shouldn’t be too difficult to decipher which category “Delta Farce” falls under. The minimal amount of effort was expended on both the writing and the acting, with recycled cliché gags that weren’t funny fifty years ago to lowest-common denominator bathroom humor polluting the screen. Writers Bear Aderhold and Tom Sullivan couldn’t have tried any less. If I hadn’t been paid to watch this movie I would’ve walked out in the first five minutes. Oh Hell, what am I saying? If I hadn’t been paid to watch this movie I wouldn’t have gone to see it in the first place.

And then there’s the absolute waste of one of my favorite actors, Keith David. Jeez, man, why did you do it? You were Spawn! You were Goliath! You kicked the snot out of Rowdy Roddy Piper! You escaped the clutches of the Thing! You’re better than this! Seeing one of your favorite actors being reduced to gags where he drinks urine and eats tobacco spit is never a pleasant site.

There’s absolutely nothing positive about this movie worth mentioning. I could warn you to avoid it like the plague, but good god, if the trailers didn’t convince you that this thing is a travesty then there’s little I could say to deter you from seeing it.

Grade: There is no letter low to enough to accurately rate this movie.