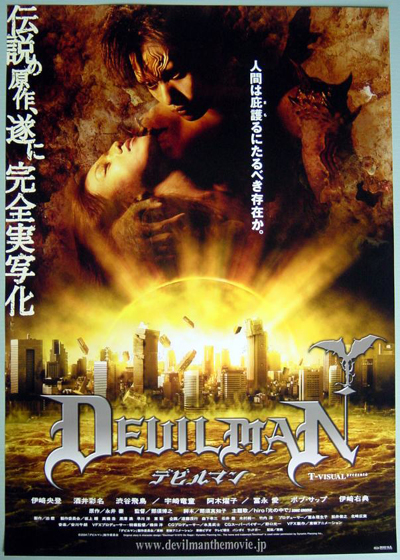 Go Nagai’s classic comic book and anime character, Devilman, is considered one of the “sacred” franchises in Japan, not only for its revolutionary and graphic story-telling, but for being just really damn cool. So did Devilman maintain that “really damn cool” status in the transition from comic to film?

Basically, Akira Fudo is a shy, meek high school boy who is suddenly hurled into the dark world of Heaven and Hell when his childhood friend, Ryo, comes back into his life. It seems that due to global warming, demons buried in ice eons ago are breaking free and gradually taking over the world. The only way for humans to combat this menace is to fuse their spirits with those of Hell’s most fiendish inhabitants. Akira lucks out and finds himself possessed by the all-powerful Amon. Using Amon’s strength, Akira can transform into the mighty Devilman whenever the legions of Hell rear their ugly heads. And the demons are arriving by the boatload, as it would seem Devilman has ushered in Armageddon-itself.

That outline sound decent-enough? Well, it makes for a fantastic comic book, and an even better anime series. However, trying to turn that into a 90-minute live-action movie didn’t turn out so well.

This movie fails on numerous levels, the first and most important being that it attempts to cram FIVE volumes of story arcs (basically, the entire series) into an hour and a half. The result is the introduction and elimination of new characters at such a rapid pace you hardly care about any of them. Some of the best parts of the source material are simplified or omitted entirely, enraging pretty much any Devilman fan. And the story moves along so quickly, and so unnaturally, you’re left thinking you just watched clips from THREE movies, chopped into one.

But to be honest, even if they had three movies to tell the story I’m still not certain the director could have managed a competent film worthy of the epic scope of the comics. The CG effects are rather good; acceptable at any rate. What’s annoying is that in the middle of fight scenes, everything will turn into black and white cel-animation for a few seconds. I suppose this was the director’s idea of “cool”, but it’s honestly pretty stupid to look at. And while the story would have greatly benefited from several installments to pace it properly, I don’t think I could sit through three films utilizing that kind of direction technique.

Then, I suppose I should bring this up for any Devilman fan reading this review, the changes to the story I mentioned earlier are absolutely ridiculous. Most of Devilman’s origin has been completely hacked to pieces; instead of demons being summoned with a violent black Sabbath, Ryo uses science fiction technology to open a portal to Dimension X…I mean “Hell”. Ryo also uses what can only be described as a “Virtual Reality Helmet” to show Akira what demons are like instead of the cursed demon skull-helmet.

These changes are really unnecessary, eliminate a good portion of the supernatural element for the sake of adding ridiculous science fiction gadgets, and quite frankly, they’re just STUPID.

Also, if you recall all that stuff I mentioned earlier about Devilman being “disturbing” and frequently crossing the boundaries of “good taste”…well, you’ll find little of that in this movie. I suppose to make it appeal to a larger audience, they removed some of the more graphic sequences from the story and REALLY tamed things for the squeamish. The real Devilman is all about going over the edge and being as violent and disturbing as possible; censoring it for a wider, weaker audience is just insulting the source.

There are a few merits to the film. The casting is pretty much spot-on accurate; Akira and Ryo look identical to their comic book counterparts. When it’s not turning into a cartoon for no apparent reason, the CG effects are remarkably good. While tamer than it ever should’ve been, the movie does manage to include many of the darker sequences that were essential to the story (mostly when Armageddon arrives). And for Devilman fans, regardless of how bad the movie can get, you will feel moments of glee seeing your favorite characters come to life with big budget effects.

And on one final note, I’d like to ask any Japanese people out there one question; What do you SEE in that Bobby Sapp-guy!? What is the obsession with this dude? It can’t be for his so-called “acting”, because he has no clue what that word even means. He must be the only black person in the entire country or something.

Now, as a final grade I have to give this movie a flat-out D. There’s a chance it might impress some viewers with no knowledge of the source material, but 90% of the people who are going to seek this film out will be the fans of the franchise. And you WILL be horribly disappointed with the waste of so much potential.