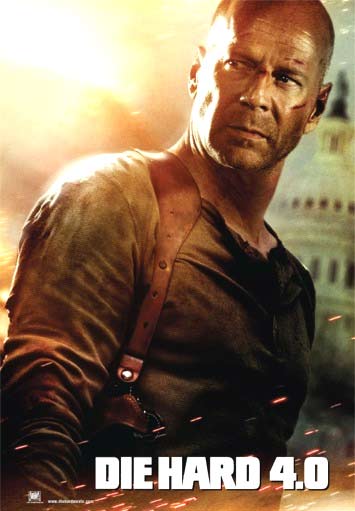 2007 saw a couple of movies that tried to bring back its stars to the dizzying heights of popularity they once enjoyed. One was the fifth Rocky installment while the other one was the fourth sequel to the Die Hard franchise.

Diehard 4.0 continues the story of the beleaguered John Mclane a man who is, as the blurb in the movie posters and publicity releases say, at the wrong place at the wrong time. Over the course of three movies, McLane has defied the laws of probability by always being at the worst possible place at the worst possible time. From a high-rise, to an airport, to the crowded streets of New York, Bruce Willis’ John McLane had to endure terrorists trying to make mincemeat out of him. The fourth sequel is no different as McLane is, once again, called in to make a routine “escort” to a known hacker but everything goes downhill from there.

The new bad guys in this installment are cyber terrorists. I have to give the writers a small pat on the back for at least not resorting to Muslim extremists again as the bad guys on this Hollywood movie. Having said that, the first half of the movie took a painstaking amount of time to show viewers that, yes, nerds are the spawn of Satan and that they should be feared. To help in the transformation of nerds into villains that could even surpass Al Qaeda in malice, Timothy Olyphant (Deadwood) was asked to take on the role of the lead nerd/villain. He is a different nerd though because he is ruthless and he actually has a hot girlfriend in the form of Maggie Q (MI:3). Olyphant gave a passable performance as Thomas Gabriel. It never reaches the kind of intensity that he shows in Deadwood.

Now let’s go to the lead star. Bruce Willis’ McLane in this sequel has less quips and more angst, a character change that started with Die Hard with a Vengeance. It does show that the McLane character has somewhat grown up but by the latter half of the movie, the old McLane suddenly shows up. I don’t know if this is a mistake on the writer’s part or a studio decision to bring in some laughs but it feels tacked on. Justin Long has been my favorite young actor ever since I saw him in Jeepers Creepers and he brings in a very credible performance as Matthew Farrell the hacker target of Gabriel. Long manages to be funny without being irritating (hear that Chris Rock?). But the most memorable performance in this movie is hands down that of director Kevin Smith’s. Smith should even be given a spin-off movie for his character Warlock. He gave his role of the uber-hacker such pizzaz and understated humor that all of the scenes with him in it become the Kevin Smith show.

Ultimately though, the strength of the movie lies on the shoulders of its director. Len Wiseman (Underworld), who has earned the ire of men all over the world for bagging Kate Beckinsale, gives Diehard 4.0 more of an edge. His shots are more dynamic and his style has vastly improved from the first Underworld movie he made. One niggle though is that he really loves to use blue filter in his interior shots – I don’t know if it is a personal trademark he wants to develop but it is quite an obvious trademark if that is his intent. Wiseman proves that he can really develop into a very good action director. He is definitely better at this than Renny Harlin.

The editing on Diehard 4.0 is very crisp, no excess seconds were left on screen for this baby, which was a big failure during the third sequel.

Overall, Diehard 4.0 is an entertaining return to the John McLane “legend” but I hope this is going to be the last one. It may be quite fun seeing Bruce Willis run around with his quips, but it gets harder and harder to believe that a man in his late 50’s can still survive those falls without breaking a hip.