Video game movies are predetermined to fail as long as they insist on holding fast onto their video game roots instead of attempting to succeed as independent cinematic works. Looking at the track record, we see that the two best attempts thus far have been Mortal Kombat and Resident Evil, both of which were directed by Paul Anderson. At best, both films were mediocre (as are all of Anderson’s films with the exception of Event Horizon): for every painfully awkward moment of fandom reference (Johnny Cage signing Scorpion an autograph) or fanboy appeasement (Milla Jovovich jump-kicking a dog), you had consistent storytelling or a buttload of genuinely cool effects to dismiss previous infractions.

So how does Doom fair? 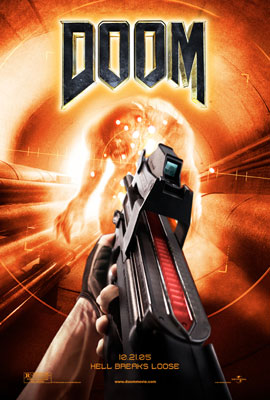 Let’s start with the story. Having only played the first Doom and none of its sequels, I can only judge the merit of the plot alone. The movie tediously unfolds the bizarre research that scientists on Mars have been doing. Archaeologists have found skeletal remains on Mars which have an extra chromosome, chromosome 24. They also discover that these inhabitants of Mars also had super-human strength and a rapid healing ability! You can guess what happens next: they start importing convicts and testing them with the extra chromosome. That’s when things start to go wrong and their guinea pigs start mutating into horrific creatures with a fierce appetite for destruction and reproduction. But wait! Apparently, the chromosome’s effects on the body are different depending on the morality of the person infected. As Rosamund Pike’s character points out, 10% of the human genome has yet to be mapped and scientists say that this remaining trek is the “blueprint of soul.” Huh? I thought we mapped the genome in its entirety back in 2003? Anyway, assuming she’s right, the point is that if you’re a bad dude and you get injected with this chromosome or get beast-raped in the neck, you turn into one of the constantly mutating monsters. If you’re a good guy, you turn into a first-person shooter.

Which is the only part of the movie which shines. After an hour and a half of half-decent Aliens-wannabes moving through dark corridors with heavy artillery, we get the only original concept in this film to set it apart from other crappy movies: a first-person perspective. You heard me. The camera goes directly into the head of Karl Urban and for the next 5 minutes goes on a pretty awesome shooting spree, killing at least 7 zombies and one huge monster before leaving this view and ending the movie with an extremely lame WWE deathmatch with The Rock. If they had used the first person p.o.v. during the earlier action scenes of the movie instead of waiting at the end, it would have certainly elevated my opinion of the movie by way of innovation. But no: they save it for the end to show that when you are dying and get injected with Martian juice, you get gifted with first-person skills and can perform backbreakers.

Until Silent Hill comes out in April, Doom remains shelved with Anderson’s films as an almost-successful attempt at making a decent video game adaptation.