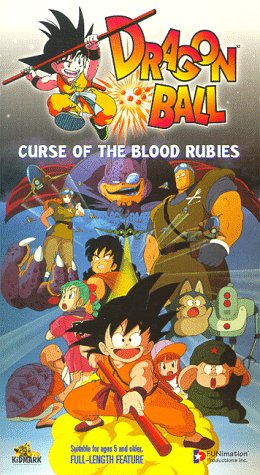 In a peaceful village, the greedy King Gurumes has begun mining for Blood Rubies. However, with the Blood Rubies come a terrible curse which transforms the once gentle King into a gigantic monster. His hunger unable to be satisfied no matter how much he eats, King Gurumes sends his thugs out across the globe to track-down the Dragonballs: 7 mystical orbs which, once united, can summon the Eternal Dragon to grant a single wish. Unbeknownst to King Gurumes, a teenage girl named Bulma is after the Dragonballs, too, and her quest leads her to the home of the orphaned wildboy, Goku. Goku’s a talented martial artist but a bit on the naïve side. King Gurumes’ goons steal Goku’s Dragonball, a gift from his deceased Grandfather, and Goku and Bulma head out to get it back. Along the way, Goku and Bulma meet Penny, a girl from King Gurumes’ kingdom, Oolong, a shape-shifting pig, Yamcha, the desert bandit, Puar, Yamcha’s assistant, and Master Roshi, the geriatric martial arts master of the Kamehameha.

While it’s the most classic story in the Dragonball mythos, I can’t help but feel a little bored whenever I watch this movie, mostly because the story has been retold at least 4 times: the manga, the TV series, “Curse of the Blood Rubies” and “The Path to Power”. It’s classic, for sure, but you can only watch it so many times. On the bright side, they manage to condense the story and work-in all the characters rather well. The subsequent Dragonball films do a better job of adapting episode arcs while providing more original material, though.

As of right now, the only version of this film available in the US is the edited cut from the late 90’s. While I do hate edits, a part of me somewhat appreciates the edited version. It maintains nearly all of the violence of the original version as well as some of the cruder jokes (Bulma wetting herself) but removes the perverted gags. To this extent, it’s perfect for young children, because honestly, even with the dirty jokes intact, most teenagers are going to find this movie a little childish. The added scene-transitions and wipes do look very tacked-on and ugly, however.

The dub performed by the Ocean Group, one of their earliest works in regards to Dragonball, is actually pretty good. They definitely improved over time (becoming fantastic by Dragonball Z), but they hit many of the character’s with a perfect bullseye. Saffron Henderson does a good Goku, Gary Chalk is a menacing King Gurumes and I really like the voices for Bulma, Yamcha and Oolong. I suppose my only major complaint is Puar’s voice, which is a little on the irritating side (I think they were trying to go for a British accent but it still sounds off). A lot of fans of the Japanese dub never liked the US voice-portrayal of Master Roshi as a senile old man, and it is a little too cartoonish, but I’ve always found it funny. Roshi had many English voices over the constantly fluctuating cast of Dragonball and Dragonball Z, but his best was definitely the later Funimation voice actor.

The animation by Toei Studios isn’t anything to write home about. A few of the fight scenes, such as Goku’s fight with Yamcha and Goku’s aerial battle against Gurumes’ thug on the hoverboard, are worthwhile but I wouldn’t qualify them as “visually stunning”. The animation is consistent and smooth, but nothing about it screams “movie quality”.

“Curse of the Blood Rubies” is a good introduction to Dragonball and the edited version is perfect for kids. For the Dragonball fanboy, though, the movie loses its rewatch value rather quickly. The future Dragonball movies, such as “Sleeping Princess in Devil’s Castle” and “Mystic Adventure” are a bit better.