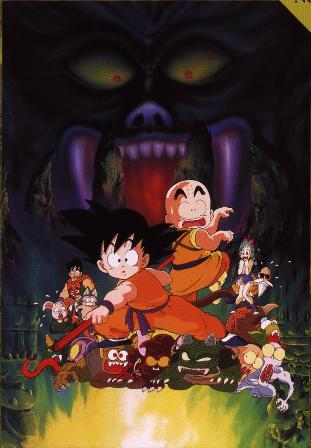 Maybe it doesn’t have the best title, but “Sleeping Princess in Devil’s Castle” is my favorite of the three original Dragonball films. While the first installment, “Curse of the Blood Rubies”, retold the origin of Goku and how he met all his friends, this installment retells how he met his best friend, Krillen, and how they earned the privilege of training with Master Roshi. So, if you’ve already seen that arc of the television series you’ll be pretty familiar with the story here. However, unlike “Curse of the Blood Rubies”, “Sleeping Princess” adapts the storyline to a more original plot so it feels much more fresh and isn’t quite a blatant rehash.

Goku returns to Master Roshi’s island and asks to be trained by the Turtle Hermit. However, at the same time, another young martial arts master named Krillen shows up desiring the same thing. Master Roshi sends them both out to a dark region called the Devil’s Hand to retrieve a sleeping Princess for him; the one who brings her back earning the right to become his student. So Goku and Krillen race to rescue the Princess while their other friends, Bulma, Yamcha, Puar and Oolong, head after them. Once they arrive they discover the Devil’s Hand is ruled over by the sinister Count Lucifer who intends to use the power of the Princess to destroy the sun. Further complicating matters is the sudden arrival of ultra-violent treasure hunter, Launch, who wants the Princess for her own greedy reasons. So who’ll end up with the Princess?

I actually prefer this telling of Goku and Krillen’s first encounter and their test to become Roshi’s students over the original version presented in the manga and the TV series. “Sleeping Princess” has a little more substance to it while the original version just had Roshi send them out to essentially kidnap a hot chick for him. This one also involves the whole colorful cast of Dragonball, a cast I prefer over the one from later Dragonball Z. I just find the likes of Yamcha, Puar, Oolong and Roshi more interesting and entertaining than the bland Saiyans like Trunks, Goten and yes, even Vegeta.

The animation provided by Toei Studios is a bit underwhelming, only providing a few moments of outstanding fight choreography. Other fight scenes have the characters sort of just “floating” about and looks very awkward. Still, the some-what stiff animation is helped along with charming character designs, background art and a very eccentric cast of heroes. However, Count Lucifer isn’t the best villain, honestly, and I found his big pink General to be far more exciting a bad guy. Still, Dragonball is a much more jovial series than its successor, Dragonball Z, and it gets its kicks with lots of humor, most of which hits the mark. So you can’t expect the most epic story-telling, here.

The English dub for the film was done by the Funimation cast rather than the Ocean Group and I really can’t find myself complaining about any of the voices. I really like their version of Master Roshi; he’s just such an over-the-top, goofy perv. Evil Launch’s voice is also quite nice, though her Good version can’t quite decide if she wants to sound like a feather-brain of a Southern Belle. This movie, as well as “Mystic Adventure”, also features Funimation’s alternate Dragonball-voice for Goku. For the television series they simply chose the voice actor for Gohan to do Goku, a choice I was never really fond of. I greatly prefer this actor for Goku as the voice is much less coarse and grating.

Not too much else to say about the movie. The only version available on DVD is the uncut version which maintains a few of the more perverse jokes and a couple seconds of male (child) nudity, but it’s totally harmless so don’t get the wrong impression. While the perverted gags with Roshi are maintained, they’re honestly rather tame and will fly over the heads of most kids. I’d say the film is suitable for most children.

“Sleeping Princess in Devil’s Castle” gets a B-. It’s a good flick but not something I watch on a regular basis, and again, if you’ve seen the TV series the story won’t totally excite you.