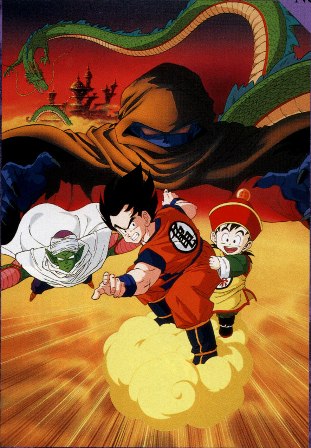 The early Dragonball Z movies will always be my favorite. These were from the days before Super Saiyan level 72, deus ex fusions and villains that were nothing but the same product in different packaging. Back when a kamehameha actually meant something and characters cared about the Dragonballs (those things the show is titled after).

In Dead Zone, the evil alien known as Garlic Jr. seeks to gather together all 7 fabled Dragonballs in order to be granted the gift of immortality. His goons carelessly drag young Gohan along with them as they steal his Dragonball. Little do they know, Gohan is the son of the World’s Strongest Man, Goku! Goku quickly tracks the villains down but arrives too late; Garlic Jr. has already been granted immortality and can never be killed. Goku’s pal, Krillen, and his then-arch-nemesis, Piccolo, join in the fray but find that Garlic Jr. is no easy challenge.

I prefer the Dragonball Z movies to the television series. It’s basically everything that makes the TV series fun (insane fights, spectacular choreography, colorful characters, zany plots) but without everything that makes the TV series annoying (filler, consistently stiff animation, filler, constantly unnecessary comedy relief, filler). At least, most of the movies don’t succumb to those set-backs.

The animation in Dead Zone isn’t anything overwhelmingly spectacular, but it is several notches above the best episodes of the TV series and, unlike many of the later films, stays consistent through-out the entire movie. Often times in the future movies, the bulk of the budget is reserved for the fight scenes, making the “boring” scenes in the movie very awkwardly, and poorly, animated. Dead Zone doesn’t have that problem and the characters look great even when they aren’t doing anything exciting.

However, this movie is only 45 minutes-long, so the pace stays at break-neck speed for the most part. The fight scenes are great, the best one being when Ginger and Nicky break-out their swords and duel Goku and his power-poll. The choreography between the three characters is exciting and hilarious at the same time and is at the very least the best fight in any of the Dragonball movies that involves swords.

The showdown with Garlic Jr. also manages to build some of the best tension in any of the movies, with all the heroes fighting a seemingly hopeless battle with the immortal bad guy, all while the Dead Zone dimension is sucking everything into its gaping portal. I wouldn’t say it qualifies as a “nail-biter” but it does make things a lot more hectic.

This is also one of the only three Dragonball Z movies to have been dubbed by Canada’s Ocean Group; you might remember them as the first cast of people for Dragonball Z’s English dub, and who many consider to be the superior voices. Indeed, the Ocean Group delivers one of their best performances for the dub. Scott McNeil’s Piccolo is badass incarnate, while Don Brown’s rendition of Goku (although I preferred Ian Corlett’s) is very humorous and fits the character perfectly; he’s a riot during that sword fight. It’s a shame the Ocean Group didn’t stick around long enough to dub a few of the later movies, particularly 5 and 6. I always wanted to hear Brian Drummond’s infamous Vegita-voice without the restrictions of TV censorship.

Dead Zone does have its drawbacks, though. Gohan’s musical number in the middle of the film is out of place amongst all the violence and is really more annoying than entertaining. The older audience will most-likely just fast-forward through that part. Then there’s the length. Anybody paying more than $15 bucks for a 45 minute movie is going to feel ripped-off. It’s a good movie, but I can’t rationalize paying very much for such little content.