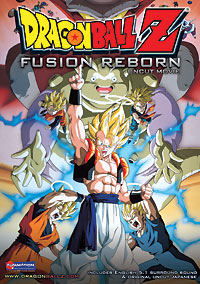 The Dragonball Z movie series is one-step away from its conclusion, and to be honest, it’s really for the best. The Buu Saga, with all its goofiness, redundant levels of Super Saiyan and filler beyond anything you’ve ever experienced before, ranks as my least favorite of all the Dragonball Z story arcs and is one of the reasons why I quit watching the television show. And sadly, this movie culls most of its inspiration from that very story arc.

Story-wise, it goes like this: a dimwitted teenage employee in the Afterlife accidentally busts a machine collecting negative energy from souls departing to Hell. The negative energy possess him and he becomes the all-powerful, but annoyingly childlike, Janenba. Janenba wastes no time turning everything in sight into candy, and by flexing his powers over time and space, breaks down the barrier between the world of the living and the world of the dead. Gohan and Associates get in gear rather quickly to save their city from the walking dead (and a certain Nazi dictator) while Goku and Vegita take-on Janenba in the Afterworld. Things go from bad to worse when Janenba stops fooling around and transforms into his mightiest form, JanenPA. If Goku and Vegita want to win this battle they’re not only going to have to put aside their differences and fuse into a single super-being, but they’re going to have to do it RIGHT.

I’d say the worst part of the movie is Janenba. The character is, for all intents and purposes, Majin Buu colored yellow. He acts the same, he looks the same and he has the same candy-fetish. So if you loathed the Buu Saga as much as I did, you’re going to totally hate the first half of this movie.

Luckily, once the action picks up, he transforms into the royally hardcore Janenpa. The bulk of the animation budget was dedicated to the fight scene between Goku, Vegita and Janenpa, so the brawl is absolutely gorgeous to look at. What makes Janenpa so cool are his attacks utilizing his ability to warp time and space (think “The Spot” from Spider-Man only more violent). The animation never fails to accommodate this unique talent and the battle really shines as one of the best in the entire movie series.

Regretfully, since the majority of the budget went toward that fight scene, the rest of the movie has animation-quality noticeably worse than most filler episodes of the TV series. A few “artistic” devices were used to try and make this seem less obvious, like making most of the ghosts and zombies look completely flat with thick, black outlines (like the animation in Clerks: the series). Yet despite all that, the scenes not involving Janenpa are incredibly dull to the senses.

I’d also like to say that the movie had one of the most badass and also the most disappointing moments I’ve ever seen in a Dragonball Z movie. In one scene, Frieza makes a grand comeback and confronts Gohan. The two get ready to spar when Frieza commands an entire army of dead Dragonball Z villains from the TV series and the movies. It’s one of the coolest things I’ve ever seen and really got my hopes up. Unfortunately, this lasted maybe 5 seconds. I won’t ruin how it ends for you, but chances are you’re going to be just as painfully disappointed as I was.

The main focus of the movie, the fusion of Goku and Vegita into Gojita, is remarkably unsatisfying. To try and create “tension” they include a torturously long segment of the most childish potty humor you can imagine, and quite frankly it just isn’t funny. The appearance of Gojita at the end isn’t going to impress anyone at this point in the Dragonball timeline either, as once you’ve seen one Super Saiyan transformation you’ve quite honestly seen them all.

“Fusion Reborn” has one of the most glorious fight scenes you’ll see in any Dragonball Z movie, hands down. However, this only makes up a very small portion of the actual film. The story is just rehashed from a uniquely bad arc of the TV series, the animation when characters aren’t fighting will have you wishing you were doing Algebra homework instead and the bit with Frieza is such a rotten waste of potential you might just hurl a brick at your TV.

This gets a C-. If it weren’t for that fight scene I’d rank it quite a ways lower.