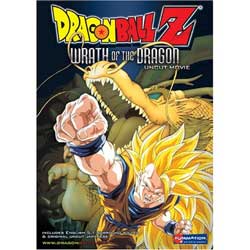 After cantering along, relying on lukewarm rehashes of television episodes or boring returning villains that just wouldn’t go away, the Dragonball Z movie franchise finally manages to get its act together for the 13th and final installment. And damn, does the franchise go out with a bang!

Gohan and Videl are hoodwinked by a creepy old man named Hoi into helping him release a great hero, Tappion, from his prison within an enchanted music box (these are the strongest people in the Universe, not the smartest). Using the power of the Dragonballs, the heroes release Tappion, but as it turns out, he wasn’t incarcerated in the music box all by himself. By setting Tappion free they also unleash Hirudegarn, a monstrous dragon which devours people and lays waste to entire planets.

“Wrath of the Dragon” seems to be pretty self-aware that it’s going to be the grand finale of the franchise, so it places a pretty big emphasis on “grand”. Unlike previous Dragonball Z movies, “Wrath of the Dragon” has consistently gorgeous animation from start to finish. While other sequels save the budget for the fight scenes, leaving the rest of the movie to look bland and ugly, Toei Studios maintain a level of highest quality in every scene. This really looks like it belongs in a movie theater.

“Wrath of the Dragon” also has something going for it that previous Dragonball Z movies sorely lacked: a story. The back-story of Tappion, Hirudegarn and Hoi is very epic, giving the characters a memorable quality. In previous films, the villains tend to be very generic copycats of villains from the TV series, but Hirudegarn, a giant dragon-creature made of mist, is quite unique. The story is more up to the quality of the first three Dragonball Z movies, where they dared to be different. Tappion’s back story is rather tragic and he’s one of the better characters to come along in the era of Dragonball Z where anything and everything revolved around Saiyans. While it’s a shame we never got to see more of him, he does leave a lasting effect on Trunks.

Speaking of Trunks, he gets quite the spotlight in this movie. I’ve never been a fan of Trunks, to be honest. His entrance into the TV series marked the decline of my interest, as all the characters I came to love from Dragonball and early DBZ were pushed aside to make room for one new Super Saiyan after another. Yet, through-out this movie I don’t find myself annoyed by Trunks hardly at all. The overall tone of the film thankfully avoids goofy and silly humor (something “Fusion Reborn” had an overabundance of) and leans heavily toward a dark angle, with cities being destroyed and innocent bystanders being eaten alive. Perhaps it’s because they avoided the silly slapstick humor that I managed to tolerate Trunks and Goten.

It’s also good to see Goku alive again. He’d been dead for so many movies I almost forgot he was ever alive. I also smirked with approval when Vegeta made his big entrance for the final battle with Hirundegarn. I was nearly worried he wasn’t going to show up. Original non-Saiyan characters, the characters I like the most, don’t get much of a spotlight in this film, regrettably. Bulma manages to get in a bit of screen time, but Krillen (one of my favorite characters) is used for a brief moment of typical comic relief and doesn’t even get to fight. Even more depressing is that Piccolo is noticeably absent from the final movie. Master Roshi makes a quick cameo with his usual drunken lecherous antics, but it seemed rather pointless.

I suppose my only real complaint aside from the lack of my favorite characters is the final solution to Hirundegarn. It looked great thanks to more of Toei’s magnificent animation, but it seemed rather convenient and out of the blue; sort’ve watering down the villain’s threat into “Oh, well I guess he wasn’t that big a problem, after all”. There are also a few lines about racial bigotry that are delivered rather poorly, giving a “Now you know…”-vibe to them.

“Wrath of the Dragon” is easily one of the best films in the Dragonball Z franchise, like they knew they were saving the best for last. It looks gorgeous, has some brilliant fight scenes and features plenty of Super Saiyan action (if that’s your sorta thing). I have to give it a B+. Up there with “World’s Strongest” and “Tree of Might”.