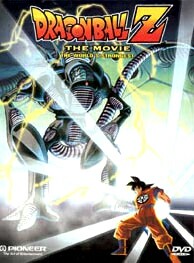 A personal favorite of mine, in regards to the Dragonball Z movie franchise, and agreed by most to be one of the best in the series. Personally, it ranks at a VERY close second place, right behind “Tree of Might”, as my favorite in the series.

The plot? Well, for a Dragonball Z movie, it actually has a pretty inspired one. Geriatric mad scientist, Dr. Kochin, uses the Dragonballs to free the evil Dr. Wheelo (pronounced “Willow” in the movie but spelled “Wheelo” on the back of the box) from his icy tomb deep in the mountains. Together, they plot to take over the world, only there’s one snag: Dr. Wheelo is nothing but a brain in a jar. Dr. Wheelo needs a body, but not just any body; he wants the strongest one in the world. You can guess what happens next. Goku and Company are brought to his fortress in the mountains to do battle with his various bio-warriors, and eventually, Dr. Wheelo-himself. If they lose, Dr. Wheelo gets Goku’s body. If they win…we get another Dragonball Z movie.

“Tree of Might” is my favorite in the series for personal reasons, but looking at “World’s Strongest” for all its merits, it really is the BEST in the series. The animation direction in this film is remarkably cinematic. Everything has a very creative and epic visual flare, as opposed to other Dragonball Z movies, which tend to be dull-looking and feel like an episode of the TV series. “World’s Strongest” feels like an actual MOVIE.

For Dragonball Z, the plot is most creative and entertaining. The TV series and the movies tend to follow the same formula of “evil alien/demon fighting Goku, transforming over and over again until it reaches its top level and then Goku has to turn to Super Saiyan 15 to beat him”. This was an early Dragonball Z film, so that means NO Super Saiyan plot-devices. Yay! The whole B-movie concept of a mad scientist with his brain inside a giant robot is very alarming considering the predictable trend of the bulk of these movies and is really most refreshing. All the characters are worked into the plot expertly and, save for maybe Krillen who kinda comes out of nowhere, nothing feels particularly forced.

Toei’s animation is gorgeous. The later movies would suffer from off-balanced animation budget (where two-thirds of the budget would be saved for the fight scenes and the remainder would be used for the “boring” stuff), but not “World’s Strongest”. The animation through-out this film is incredibly consistent and down-right pretty.

Of course, the animation shines best during the fight scenes. And let me say, this movie has my personal favorite fight in the entire franchise: Goku vs. Kishime and Ibuforiya. The battle is fast, brutal, hectic, creative and all-around CRAZY! From Kishime’s vanishing speed technique, to Ibuforiya’s ice blasts; there’s so much going on at once you almost get dizzy. And there’s one particular punch Goku throws at Kishime, you’ll know it when you see it, that I just want to congratulate the people at Toei for. EVERY time I see it I can’t help but go “OUCH!” The animation, sound, everything comes together to give an incredible feeling of power behind the blows. And there’s also plenty of fanboy-tingly moments, like Goku, Master Roshi and Krillen all shouting “Kamehameha!” at once. Great work.

And the voice-acting from Canada’s Ocean Group is once again worthy of all levels of praise. I say it often, but Scott McNeil’s Piccolo is just magnificently evil and barbaric-sounding. Saffron Henderson’s Gohan also really shines in this movie, giving the kid a tough yet cute voice that sounds childish and professional all at once. Don Brown’s Goku also deserves some kudos for striking a pitch so high while screaming “Kaiyoken!” that people often mistake it for the original Japanese voice actor (who was female).

I suppose the only real draw-back is Gohan’s musical number in the middle of the movie (they had one of these in “Dead Zone”, too). It’s really pretty annoying to listen to and very off-putting, considering how crazy-violent this movie is. It’s also kind of embarrassing when you’re telling someone how hardcore the action in the movie is, and then they have to sit through super-deformed Gohan dancing around with cartoon rulers and pencils.

This movie, at least as far as Dragonball Z movies go, gets a solid A. Whether you love Dragonball Z or are looking to get into it, this is something you should see. It’s the very best the franchise has to offer.