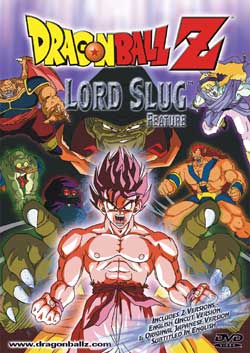 The fourth installment in Dragonball Z’s movie franchise, and regretfully, one of the most creatively bankrupt offerings, as well.

The plot of the movie is one of the most rehashed and recycled plots in all the Dragonball Z mythos; “Evil alien comes to Earth, wants stuff, fights Goku, transforms to more powerful mode, Goku goes Super Saiyan, The End.” Well, to be more specific…

The geriatric space-tyrant, Lord Slug, has come to Earth in order to terra-form it into a new home world. Upon arrival he discovers the Dragonballs and quickly uses them to regain his youth, and the full-power that comes with it. After wrecking a good portion of the planet, Goku, Piccolo and the rest decide they’ve had enough and show-up to deal with the baddy. The fight’s not as easy as they’d suspect, as Lord Slug is in reality the last of a race of Super Nameks, which means he’s plenty tough.

“Lord Slug” hasn’t got much going for it in any department. The story is just plain boring. The previous installment, “Tree of Might”, had already given us a similar bad guy in Turles, and Lord Slug just feels like more of the same. Additionally, his legion of minions has to be the most uninspired in the series (save for maybe Metamacha, whose energy-sucking babies are rather cool) and thus, none of the precursor battles leading up to the showdown with Lord Slug are particularly enthralling.

To make matters worse, the fight-choreography for this movie is just plain BLAND. When compared to the clever, brutal and fast-paced fights from the previous installments, the battles in “Lord Slug” are just rather…boring. The final battle with the title villain feels especially uninspired, as all his attacks are nothing we hadn’t seen already from Goku’s encounters with Piccolo in Dragonball.

And, last but not least, Super Saiyan level ½ is utterly pointless. Just like Super Saiyan level 1 only with pink hair. It didn’t feel at all exciting or impressive and is certainly not the way one should be introduced to the Super Saiyan concept (nothing beats that first transformation during the Frieza saga).

There were some points of interest, though. The environment for Goku’s initial battle with Lord Slug was interesting, as it takes place in the ruins of a city. I don’t know why, but I found it entertaining to watch Goku and Piccolo get tossed through department stores and super markets. Also, although it’s sadly too brief, we get to see Chi Chi kick a little ass for a change at the very beginning of the flick. She’s supposed to be one of the most powerful women in the world, but you rarely get to see her throw down. While short (she only knocks out two baddies), it’s most refreshing.

“Lord Slug” also marks the first of the movies to be dubbed by the new Funimation cast, as opposed to the Ocean Group, who had been dubbing the movies up to this point. The Funimation crew had been dubbing the TV series for quite some time before they’d gotten to this movie, so all the new actors have settled into their characters quite comfortably, which means there’s no real awkward adjustment period. While it does take some getting used to, most of the actors are rather good and take the Ocean Group’s baton admirably. Sean Schemmel’s Goku is a personal favorite, and I’d say he’s about equal to Don Brown’s rendition (Ian Corlett will always be my favorite, however). Christopher Sabat does a nice job as Piccolo, and while a far cry from Scott McNeil’s take on the character, he’s still a good casting choice never-the-less. Lord Slug-himself has a voice much better than the actual character; the actor managing an impressive “grizzled old man” voice that sounds more menacing than it does goofy.

No, the major problem with the Funimation dub is not the voices, but rather, it’s the music. While the Ocean Group dub had maintained the original music (for the movies, not the TV series), Funimation made the choice to replace it with their own, bland Kasio Keyboard-quality slop. It does manage to grow on you after a while, but that’s mostly through developing a tolerance and not an appreciation. To make matters worse, they cram in excess amounts of licensed pop rock from bands like Disturbed. While, occasionally, this music does add some pep to the fight scenes, Funimation figured it would be best to run the music over dialogue scenes, montage scenes…and…well, over EVERYTHING. If you want to hear if King Kai is saying something important or not, you first have to drown out “Stupified” as the people at Funimation hadn’t quite mastered the art of volume-control.

“Lord Slug” is a shamefully skippable installment to the franchise, and really not the best way to get acquainted with the new cast. It gets a C-. It’s not as bad as some of the later installments in the series, but the story and fight scenes are so forgettable, well, it’s just a waste of time.