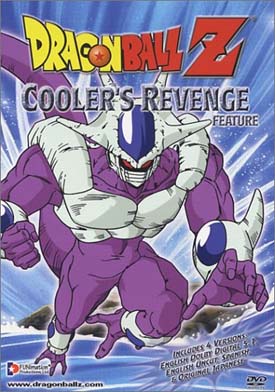 “Cooler’s Revenge” is one of the better installments in the Dragonball Z film franchise and certainly one of my favorites. Cooler has always been my favorite returning villain of the movie series, as I definitely prefer him over the annoyingly overrated Broly. While this movie is short in length (45 minutes) it has one of the more intriguing stories and some very consistent animation.

When Goku was just an infant being shuttled from planet Vegeta (homeworld of the Saiyans) his ship was spotted by Cooler, the brother of Frieza. Cooler allowed Goku’s ship to proceed, a choice that would eventually come back to haunt him, as Goku would later kill Frieza in an epic confrontation on planet Namek. Wanting to challenge the Saiyan who killed his brother, Cooler and his minions come to Earth. At the same time, Goku, Gohan and the rest of his friends are on a camping trip. Cooler quickly makes his presence known and Goku must now fight a foe even more powerful than Frieza ever was.

Cooler’s a great villain; basically Frieza minus the homoeroticism. I particularly liked his transformed state during the film’s climax, as it reminded me of Super Shredder from Teenage Mutant Ninja Turtles II. While there isn’t much more to the character other than being Frieza 2.0, his connection to Goku’s origin was pleasantly ironic, and not half as stupid as Broly’s connection. Cooler’s Armored Corps (his minions) weren’t so good, however. Another bland set of thugs, these guys just didn’t have much to make them stand out (as opposed to the thugs in “Tree of Might”, who were all very unique).

The animation in Cooler’s Revenge is top-notch, remaining visually pleasing from beginning to end and rarely cutting corners, even during the “slow” segments. But, of course, this movie is only 45 minutes-long, so don’t be expecting too many slow segments. The fights are excellent, the two best being Piccolo’s scrap with the Armored Corps and Goku’s final showdown with Cooler. I’m also grateful that the non-Saiyan characters such as Piccolo and Krillen haven’t been reduced to either comic relief or ineffectual losers quite yet. Krillen only tussles with Salsa (leader of Cooler’s Armored Corps) for a few brief moments, but it’s a far cry better than how they treated the character in “Broly’s Second Coming”.

The voice acting in the movie is both good and bad. The cast of TV regulars are as good as usual, and I really do like Sean Schemmel’s Goku quite a bit. Cooler also has an excellent voice which gets even better once he transforms. No, the major voice acting problem is with Cooler’s Armored Corps. They’re really annoying, particularly Salsa’s random German (?) accent.

Cooler’s 2 movie arc remains one of the better portions of the Dragonball Z movie series and marks a definite highpoint in the franchise. I’d give it a B. It might have gotten a “+” had it been a bit longer and the Armored Corps not been so damn annoying.