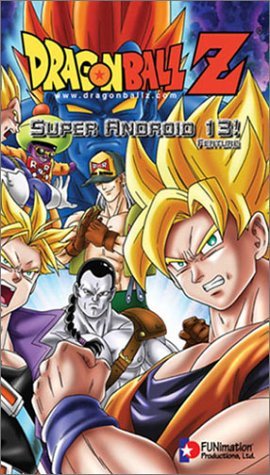 “Super Android 13” doesn’t appear to be one of the more popular Dragonball Z films, though it’s one of my personal favorites in a “guilty pleasure” sort of way. I find it rather underrated and enjoy it mostly for the reasons people seem to hate it. “Super Android 13” is cheesier than other Dragonball Z films (if you can comprehend that), but at the same time it’s pretty self-aware that it’s so goofy. It’s not one of the best installments in the series, but I always have a fun time watching it.

The mad Dr. Gero of the Red Ribbon Army may be dead, but his evil lives on within a super computer of his own design. The computer crafts three new killer robots, Androids 13, 14 and 15, respectively. Their primary function: Kill Goku. The androids waste little time tracking Goku down and quickly engage him in a fierce battle. Goku’s comrades, Gohan, Krillen, Vegeta, Piccolo and the Super Saiyan from the future, Trunks, all pop in to lend a hand.

When Funimation first began dubbing Dragonball Z I was very displeased. Gradually, the voice actors grew on me with their own individual character quirks and I came to accept them. Still, I wasn’t suitably impressed with their efforts…until I saw this movie. This is one of the cheesier Dragonball Z films and the people at Funimation knew it, so as a result, the voice acting reflects it. And it’s a total riot. They had me snickering when the diminutive Android 15 showed up speaking gangsta jive, but I nearly erupted with laughter once the title villain appeared, spewing a heavy redneck dialect (“the Red Ribbon Redneck”, as Trunks calls him). They have a lot of fun with the voice acting in this film which really adds to the entertainment value. I probably wouldn’t like this movie as much as I do if it weren’t for the voice gags.

I’m also not typically a fan of the new music recorded for the English dub, but I rather like this one. They play this funky track for Androids 14 and 15 when they first enter the city and it just adds to the humorous tone. They also dub in a few “extra” lines that make me snicker, like that last bit between Vegeta and Piccolo at the very end. “Is it over?” “Not until the fish jumps.” *fish jumps* “Okay, it’s over.” *roll credits*

The fight scenes in “Super Android 13” aren’t really the best in the franchise, though they do manage one effect in this film which outdoes all the others: the ricochets. Characters are getting tossed around and sent bouncing off the surrounding environments like ping pong balls. The animation is good, though not really theatrical quality. I noticed a few errors here and there, but nothing too distracting.

As for the villains, aside from the humorous dubbing, I suppose they really aren’t that special. Android 15 is pretty funny with his gangsta voice and alcoholism, though his outfit is pretty stupid. Android 14 comes out the weakest of the lot, with no notable character quirks of any kind. Android 13, the lead villain, steals the show with his trucker appearance and heavy Southern drawl. The bit where he goes “Super Android” for the final battle is one of the lamer transformations in the series, with him just turning blue and sprouting orange spikey hair. He didn’t really have any impressive special attacks, either.

While the dubbing won me over, I can’t ignore some of the lamer parts of the movie. I’m getting pretty sick and tired of the Spirit Bomb Solution. They manage to use it in a slightly more creative fashion in this film, with Goku absorbing the energy into his body rather than just lobbing it at the enemy in the form of an energy ball. Still, it’s getting boring. I was also damn annoyed by the amount of comedy relief humor involving Krillen. It’s embarrassing to watch one of my favorite characters get turned into such a panty waist.

In all honesty, this is a pretty bad Dragonball Z flick but dressed up with a lot of self-parody and cheesy dubbing to mask the poor story and less-than-stellar animation. To its credit, they mask the set-backs rather well. I give “Super Android 13” a C as far as Dragonball Z movies go.