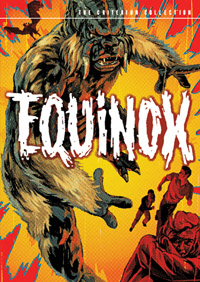 Now here’s an often over-looked horror classic. While many may debate the quality of the film, its overall impact on the genre is hard to deny. The original independent version made in 1967, with a re-edited version released in 1970; Equinox was part of a “transitional phase” in the horror genre; moving out of the era of gothic horror and campy atomic age pieces and into the darker, more risk-taking age.

In Equinox, a news reporter is interviewing a psychiatrist at a mental asylum in regards to a patient and his obsessing over a small cross. The doctor plays back a tape-recording, made a year and a day ago, of the patient re-telling his story. He and 3 friends had gone deep into the backwoods of a California valley to meet with an old archeologist friend of theirs. They find his cabin torn to pieces and strange cloven footprints in the mud. After a run-in with a freaky chortling lunatic in a cave, they wind-up with a cursed book of the damned. Apparently, the professor had read its pages aloud and summoned forth nightmarish creatures from Hell-itself. To make matters worse, the equinox between our world and theirs is breaking down. The teenagers soon find themselves under attack from other-worldly creatures which either try to eat them or possess them.

The film was produced by a handful of teenagers and budgeted on what could only be described as their allowance. The effects may be very primitive, but they carry with them a certain charm, as well. The stop-motion is far from realistic but impressive under the circumstances and budget. There are moments of glory, though, like where a Satanic monstrosity bursts into flames after colliding with a cross and sets an entire cemetery on fire.

Any of you horror experts out there might also recognize a more than passing similarity in plot between Equinox and the Sam Raimi classic, the Evil Dead. Indeed, the overall plots of both films are strikingly similar; so much so that it can’t possibly be a coincidence. As I mentioned before, Equinox has historical significance in that it paved the way for a modern age of horror films in the 70’s (Equinox-itself being a hybrid of campy gothic horror and intense modern horror). There’s no doubt that Sam Raimi must have been influenced by this movie in some capacity.

While this movie has historical value, the low budget of the film burns with intensity. The actors are very amateurish, even the adults (the crazy laughing hermit in the cave being the worst). The leading man is extremely uncharismatic, and his sidekicks can get so irritating you’re left pining for their deaths. The effects, while impressive under the circumstances, are going to make you giggle. I, personally, love stop-motion special effects and have a very high tolerance for them. However, anybody who isn’t me is going to find these effects a total joke.

Equinox is an over-looked classic for certain, and I’d recommend to it to any serious horror fan, or at least any Evil Dead fan. Still, it isn’t exactly “essential viewing”. It deserves a C+, and that’s mostly for its historical value.