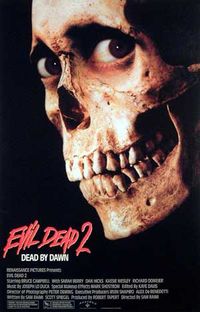 From my humble perspective, I’d have to say that Evil Dead 2 is the best installment in the Evil Dead trilogy. It leans more in the horror direction than Army of Darkness, yet maintains enough action and one-liners, and it introduces dark comedy to play off the cheesier special effects to keep people from thinking the film takes itself too seriously.

After a brief recap of the events of Evil Dead 1 (albeit, omitting 3 characters), Evil Dead 2 picks up right where the previous episode left off. Ash is beaten senseless by the invisible evil and left unconscious for an entire day. When he awakens, it’s nightfall and time for Round Two! This time, however, Ash is ready for them. With some surprise guests (the daughter of the professor who awoke the demons and a couple hillbillies) and anew chainsaw for a hand, Ash is prepared to send the demons right back where they came from. If he can stop getting his ass kicked.

First thing’s first, Evil Dead 2 is NOT a remake of the first film. Sam Raimi could not get the rights to use footage from the original Evil Dead, and thus had to re-shoot key scenes from the film to bring audiences up to speed. To save time and money, he omitted the excess characters.

With that out of the way, Evil Dead 2 tops its predecessor in just about every department. Ash has finally dropped the wussy, bewildered approach and gained some attitude. The budget is exponentially greater than the last film, and thus we’re treated to more monsters, more gore and more violence. Bruce Campbell has learned how to act by this film, too.

Raimi introduces his wacky, Three Stooges-inspired slapstick comedy in this installment, which was sorely missing from the previous film. This movie never tries to take itself too seriously and balances the outrageous horror with the dark comedy expertly. The story and effects are the stuff of cheesy B movies, and Raimi uses the humor to play off that angle every chance he gets. The scene where all the furniture starts laughing at Ash’s bumbling antics is a riot, particularly the desk lamp that laughs like Popeye.

The end of the movie, though, is the part everybody remembers best. When Ash suits up, grabs his chainsaw and shotgun and becomes a horror movie icon on par with Freddy or Jason. “Groovy”.

Evil Dead 2 is the best installment in the trilogy, being horror-enough for the fans of the original, but introducing a balanced amount of dark comedy and one-liner action for the fans of Army of Darkness.