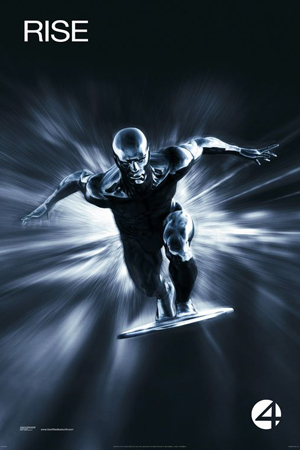 I typically refrain from making title-related puns in my reviews, but to be frank, “Rise of the Silver Surfer” totally wipes out. Tim Story’s last Fantastic Four film was an utter disaster of a comic book movie from start to finish. I hadn’t left a comic book movie feeling that disappointed since Ang Lee’s “Hulk”. Well, it pains me to say this, but Story didn’t learn a single thing from the slew of negative responses the first film garnered. Just about everything that made the “Fantastic Four” a chore to watch is present in the sequel as well as a cornucopia of new annoyances and irritations.

Reed Richards AKA Mr. Fantastic (Ioan Gruffudd) and Susan Storm AKA the Invisible Woman (Jessica Alba) are finally getting married. However, the sudden arrival of a mysterious celestial being that causes disasters all across the world has put their wedding plans on hold. It seems this Silver Surfer (played by Doug Jones, voiced by Lawrence Fishburne) is the herald of Galactus, the Devourer or Worlds, and Earth is next on the menu. Reed, Susan and the rest of the Fantastic Four, Johnny Storm AKA the Human Torch (Chris Evans) and Ben Grimm AKA the Thing (Michael Chiklis), must team with their old foe, Dr. Doom (Julian McMahon), to save the world. But Doom has his eye on the Surfer’s board which is in reality the Power Cosmic, the source of the Surfer’s incredible power.

I’m a comic book nerd and I have no compunctions about admitting it. So when I go into a comic book movie, yes, I look for accuracy, but at the same time I try to view the movie from an unbiased perspective and try to understand and appreciate the various changes. Unfortunately, in the case of Tim Story’s Fantastic Four series, these changes aren’t just bad due to inaccuracies to the source, they’re just bad period.

Making Galactus nothing more than an angry storm cloud is unacceptable. So apparently a giant guy in purple spandex and a stupid helmet would be too difficult to bring to life in a live action movie. Well, if you want to do Galactus then find a way to make it work. How? Don’t ask me, I’m not the one being paid millions of dollars to come up with the movie. Making Galactus such a non-character, basically nothing more than a sentient cloud of fire and space dust, is unforgivable.

Then you have the other villains of the film. There’s the sorrowful Silver Surfer who actually has next to no character depth or personality whatsoever. I know he’s supposed to be quiet and enigmatic, but for someone whose name is in the title of the movie, he’s really quite boring. However, he isn’t the real villain of the film. Dr. Doom returns and that laughable yuppie voice he speaks with returns with him. If there’s one thing Story could have changed, why couldn’t he have let Doom speak with a commanding voice while wearing the helmet? I feel like Dr. Doom should be serving me wine at a high-end restaurant, not enslaving humanity. He’s only marginally more threatening once he obtains the Power Cosmic, too. I think Tim Story based this Dr. Doom on the version that appeared in the first season of the 90’s cartoon series. Once he attains the Surfer’s God-like powers he doesn’t unveil any complex hidden agendas or outrageous world-domination schemes…he aspires to do no more than blow shit up. That’s not Dr. Doom. Hell, that’s not even Blastarr.

The movie tries to fit too much into too little a run-time. You’ve got Reed and Sue’s wedding, Johnny getting Super Skrull-like powers, the army recruiting the Fantastic Four, Reed and Sue having doubts about being heroes, Johnny growing up, the Surfer doing stuff, Dr. Doom doing stuff, Galactus hovering ominously overhead…Tim Story has so much he wants to tell but doesn’t have the time nor the directorial skill to tell it all.

As far as the acting and the effects go, it’s all a bit mediocre. I actually don’t mind Gruffudd as Reed, Evans as Johnny or Chiklis as Ben; they actually bring the characters to life fairly well. Jessica Alba has never been a good choice for Sue, though. She plays up the super-bitch aspects of Sue but casts aside all the warmth of the character, making her rather unlikable. It also doesn’t help that with the blonde dye-job, the blue contacts, the layers of make-up and cosmetic enhancements…she basically looks like a mannequin brought to life. The effects are alright, though Reed’s stretching still looks far too fake and cartoonish. The Silver Surfer’s effects were quite good but just about every single action sequence he appears in was used in the trailers and TV spots, so don’t be expecting anything new or exciting when you get to the theater.

I’d say that “Fantastic Four: Rise of the Silver Surfer” was the biggest disappointment of the summer, but to be honest, I had little hope for this movie from the start. There’s just no real reason I can think of to go see this movie. If you’re a fan of good action movies, then skip it, as it’s very poorly put together. If you’re a fan of the Fantastic Four, then definitely skip it, as it’s a very poorly scripted and poorly conceived adaptation of the comics.