Advent Children Need to Grow Up

Ninjas in high school are not fully mature to use their ninja powers in the real world. That is why we often turn to video games as a simulation of what is to come. I don’t know about you, but I hate RPG’s. If I’m going to waste the hours of my life sitting in front a screen, I may as well be snapping someone’s neck or trying to outdance someone else. But watching 4 guys on screen taking turns cutting some poor mushroom to “level up” is just plain lame. Which is why it is a miracle that I even made it through Final Fantasy VII, the paradigm of all future RPGs and the one to beat in terms of storyline, game play, logistics, and enduring quality of its characters. Not that I’m praising the game like some nerd, but I do give it credit as being genuinely entertaining and memorable. 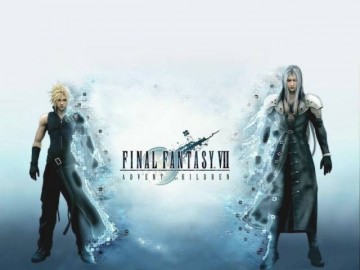 And good gravy, look what it’s given us!

Eight years later, we have the film sequel Final Fantasy VII: Advent Children. If you were a big nerd who loved the game, there is a pretty good chance that you will crap your pants when you see this movie. The film delivers on so many levels that me writing about it just won’t do it justice. It really is the type of film that you should download illegally just to see what everyone is talking about.

Where to begin? Let’s start with the obvious: this film is gorgeous. Absolutely breathtaking in every computer generated way possible, Advent Children has set a new standard for CG movies in a way that would make Peter Jackson weep from sweetness. Remember the rendering of Skull Island in 2005’s King Kong and how vibrant and painterly it looked, and how much better it would have been had those pesky humans not been in the way? This is all that times ten. Remember the fight between King Kong and the V-Rexes and how I was screaming like a little girl the whole time? Take that and multiply it by five. This film has the most ridiculously beautiful, obligatory anime-esque battles I have ever seen in all the years of stupid machismo-movie-viewing I have engaged in. A woman fights hand-to-hand with a biker in a church while classical music plays and flowers sway back and forth in the breeze. Things, obviously, get destroyed and people start kicking ass in ways I never even thought possible. And for those of you thinking that you’ve seen it all, you have no lived until you have seen two metrosexual guys with rockstar hair and big swords start to literally chop down buildings and fly around while the whole audience screams. The visuals alone are worth the admission ticket (5,000,000,000,000 yen, or $5.75).

Where can this movie possibly go wrong? I can give you one. The Japanese, as a culture, are a people of ambiguity. They never answer questions bluntly and they’re always defaulting to being polite for fear of being rude or improper. The same goes for their religion and for their philosophies: they tend to be vague and frustratingly obscure, a pain for those in search of an objective truth and a joy for your run-of-the-mill hippie who likes fortune-cookie philosophies that sound simple and are supposedly very profound. So how does this tie in to Advent Children? The story. Holy crap, I had no idea what in the world was going on. The translation that I received (the subtitles) was probably written by a 3rd grade Japanese kid. This is how bad it was: a woman says “bye” to her kid and the kid waves back and says “Oh! Respect!” Thankfully, the last 45 minutes of the movie is almost entirely devoid of any meaningful dialogue because that’s when two guys are just blowing things up. But the movie really does take a punch to the guts because of its storyline. I went on Wikipedia afterwards to look up the plot synopsis of the film in its entirety and it still didn’t make sense. It was worse than a Saturday morning episode of Pokemon, predictable in every anime clich� possible: some life-energy in the Earth is corrupted and kids are starting to get sick. A group of platinum-blue haired guys who look like Michael Jackson want to kidnap these kids and find the head of Jenova, the bad girl from the game, to bring Sephiroth (the bad dude from the game) back to life. There’s a lot of people being dipped into water and instances that look like the music video for Thriller and a bunch of Philosophy 101 rhetorical questions involving life and love and it gives me a headache just thinking about it.

But the movie IS worth watching. Maybe someone can see it and tell me what’s going on so that I can appreciate it as well.