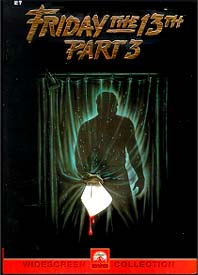 Jason, having survived the machete buried in his shoulder at the climax of the previous film, shakes off the defeat and goes about his merry way, killing stupid kids that won’t stay off his property. This time around, a handful of rowdy teenagers rent a farmhouse out near Crystal Lake for a weekend of mischief. Jason won’t stand for that, and after retrieving a hockey mask from the lovable prankster, Shelly (Larry Zerner), Jason goes bat-s*** crazy all over again.

Steve Miner returns for another round of directing duties and molds Jason’s image even further. While I didn’t hate the burlap sack, I can’t deny, nobody sports the hockey mask better than Jason (not even Casey Jones). Friday the 13th part III was originally released in theaters in 3D during the big resurgence in 3D movies back in the 80’s (Amityville 3D, Jaws 3D, etc). This makes for some special effects that fall very flat when forced to watch them on video. Most of the 3D effects look either extraordinarily stupid or extraordinarily fake. Probably the worst offenders are the rattlesnake, the flying eyeball and the harpoon; on all of which you can clearly see the operating wires.

The dated 3D effects are one of the major detractors of the film while the other one would have to be the acting. Now, I won’t say that anybody who watches an 80’s slasher flick should go in expecting Oscar-worthy performances, but all I request is that the acting not be so bad it gives me ulcers. Well, they’re all really bad. Particularly “Rick”, his observations about male sexual needs while hoisting hay into the barn is outrageously hard to listen to. However, Larry Zerner isn’t so bad and he’s probably the one victim you’ll remember from the whole film.

Now, what do we all watch Friday the 13th films for? Answer: the kills. Part III has a number of good kills, like hot pokers, machetes and pitch forks to the gut, but it also has *the* kill. There are a lot of awesome kills throughout the franchise, like the sleeping bag kill from Part VII or Julius’ decapitation from Part VIII, but the one most-noteworthy kill in Part III ranks as my all-time favorite. A character named “Andy”, while standing on his hands, gets cleaved in two from the crotch to his shoulder. The kill is edited perfectly, with the best camera angles (Andy looking upward at Jason with his machete raised in the air), believable special effects and is just so magnificently brutal you’ll have to rewind your video and watch it over and over.

Friday the 13th part III, despite having some good kills and making probably the most important costume-decision in the entire franchise, is brought down solely by the painfully bad 3D effects and the painfully bad acting. I give it a C mostly due to that hardcore kill.