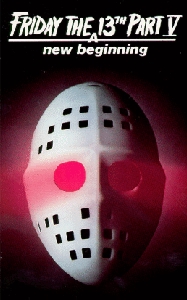 Now here’s a Friday the 13th film nearly the entire fandom unanimously agrees is absolutely atrocious. Why, you ask, is it looked down upon so? Probably because it doesn’t have Jason in it. Much like how Halloween III lacked Michael Myers or Silent Night, Deadly Night IV omitted the killer Santa Claus, when a franchise makes a movie lacking the one aspect people recognize and appreciate most, fans aren’t going to be happy.

Tommy Jarvis, survivor of Part IV and the one who smote Jason, is now a teenager with severe mental health issues. Apparently, that little incident with the machete-wielding psychopath seriously screwed up his head and now Tommy is learning how to reenter society at a crazy camp. While Tommy’s there, however, another one of the resident nutbags, Victor, goes berserk and murders another resident with an axe. Victor is carted away by the police but the killing doesn’t end there. Someone in a hockey mask is stalking and murdering the residents one-by-one and Tommy’s about to totally lose it.

I really feel silly saying this, but I’ll do it anyway. *Spoiler Warning* Ugh, a spoiler warning for a movie that’s 20 years old? Anyhow, we find out that the killer is a guy named Roy who appears maybe twice in the film for a handful of seconds. Apparently he was the father of the kid Victor killed and he went nuts. It’s a really bad revelation at the end, on par with maybe the unmasking of a Scooby Doo villain. It also defies all logic, as Roy is a normal human being yet he takes some seriously fatal damage toward the end of the movie and just shrugs it off. To make matters worse, the characters in this movie are royally obnoxious. Because they’re in a mental health camp they all have to have some sort of brain defect which make them excruciatingly irritating.

This movie does have its upsides, though. It has one of the highest bodycounts in the entire franchise, so you’re going to get a whole lot of kills in this installment. Most of the kills feel like filler, as they’re just random people on the side of the road or sitting in a parking lot, introduced in a span of 5 minutes for the sole purpose of dying. Still, when it comes to slasher flicks, quantity over quality really works. There are some very memorable kills in this flick, like the belt tightening around that dude’s skull, or the motorcycle decapitation, or the kill in the porta-potty.

And while Part V gets a lot of flack, it *does* serve an actual purpose to the overall storyline of the franchise. It continues Tommy’s story and shows his obsession with Jason and gradually depleting sanity. It’s an essential transitioning point for Tommy between the events of Part IV and Part VI. It’s also important in that it gives Jason a break, making his grand return in the next film feel all the more special. So, in that regard, Part V is an important chapter in the Friday the 13th storyline, albeit a quality-challenged one.

It gets a C-. It rescued itself from a D thanks to some very good kills, and a whole lot of em.